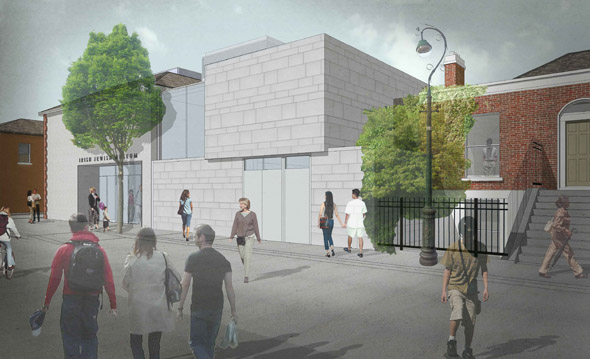 A fundraising campaign to fund an expansion of the Irish Jewish Museum is underway. The museum at Walworth Road, in Dublin, has plans drawn up by an Office of Public Works design team led by Angela Rolfe. The current premises is inadequate to display the collection to its full potential. The new extension runs behind three mid 19th century houses that have been donated to the museum. The extension will contain display space, conservation facilities and and will be six times the size of the existing premises. The entire project will require a fund of around 10 million Euro.

The museum is in a former Synagogue built in 1917 in two adjoining terraced house on Walworth Road, off the South Circular Road. The surrounding area, known as Portobello, was previously a Jewish area nicknamed Little Jereuselem. The large scale emigration that affected Ireland in the 1950s had a particularly strong effect on the Jewish population; there was also a migration to the suburbs. The Synagogue fell into disuse and ceased to function in the early 70′s. The premises remained locked for almost fifteen years, and was brought back to life again with the establishment of the Irish Jewish Museum Committee in late 1984. The synagogue is preserved, there are also artifacts on display and the museum houses genealogical records.