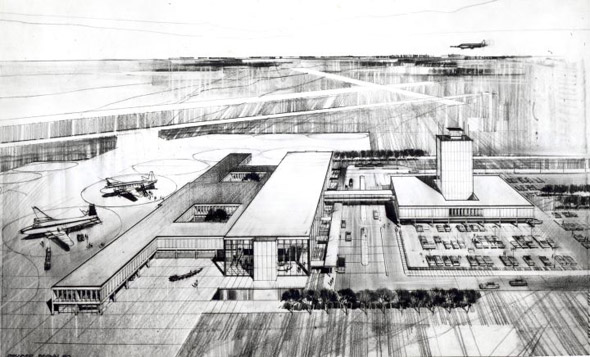 Architects concept from 1960 of a new airport terminal for Winnipeg. Eventually completed in 1963, and closed in 2011. The project, estimated to cost $8.5m but eventually over twice that, included a terminal, administration building with tower, parking for 750 cars, a power plant and the necessary sewer and water infrastructure. That facade of the terminal was a 58,000 square foot glass wall with a protective coating gave it an almost black appearance. Inside the arrivals and departures were placed on two levels, one a mezzanine to give a sense of space. Overtime, the courtyards and original observation deck that acted to bring in more natural light and display public art were eventually filled in to create more office space. Awaiting demolition.