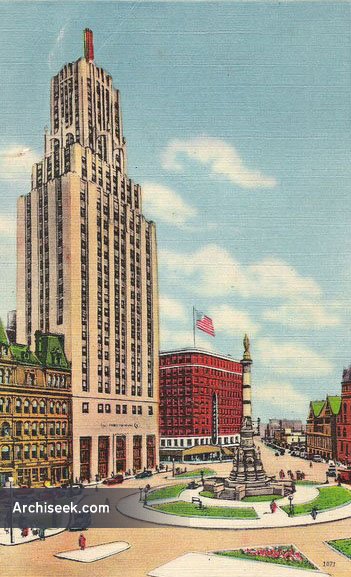 One of Buffalo’s “Skyscrapers” which makes up our Metropolitan skyline. Built in 1929 by the Marine Trust Company of Buffalo, rising 408 feet above street level-including a 40 ft. beacon tower, visible for many miles in all directions.

“The Rand Building on Lafayette Square was Buffalo’s tallest building (29 floors) when it was opened in 1929. It was named in honor of George F. Rand, Sr., long-time president and chairman of the board of Marine Bank. It was largely his vision and efforts which led to New York State’s first consolidated banking system called Marine Midland Corporation. Marine takes its name from the fact that originally its main customers were largely from the grain and marine trade on the lakes and along the Buffalo River.” – David M. Rote, Buffalo’s Three Towers of Power