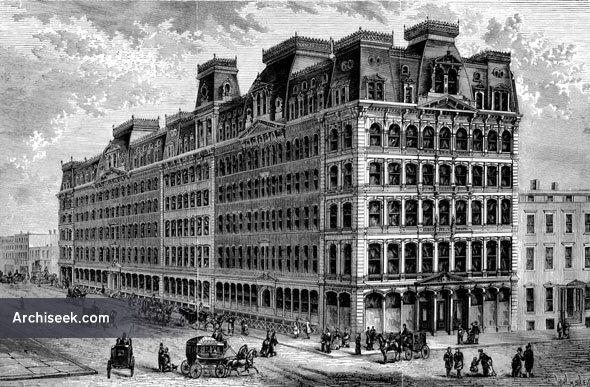 The original Arnold Constable & Company’s building at 887 Broadway from 1869, was eventually extended along the length of 19th Street to Fifth Avenue, all in a similar style by Thomas. The building grew over 10 years, with sections divided by brick firewalls, but the interiors were kept as open as possible, supported by cast-iron columns to allow for flexibility in displaying merchandise. In later years, sections would be connected together with courts naturally lit with skylights. As well as sales floors, the building contained warehouse storage space and workshops. The later section’s ornamentation was done in cheaper cast iron rather than in the more expensive marble of the original building The New York Herald said of the completed building: “By a nice arrangement and symmetrical adaptation of all its parts the massiveness of the structure is pleasantly relieved, and the building thus rendered, from an architectural point of view, one of the finest edifices in the city.” Illustration showing the emporium from 5th Avenue published in The Builder, June 16th 1877.