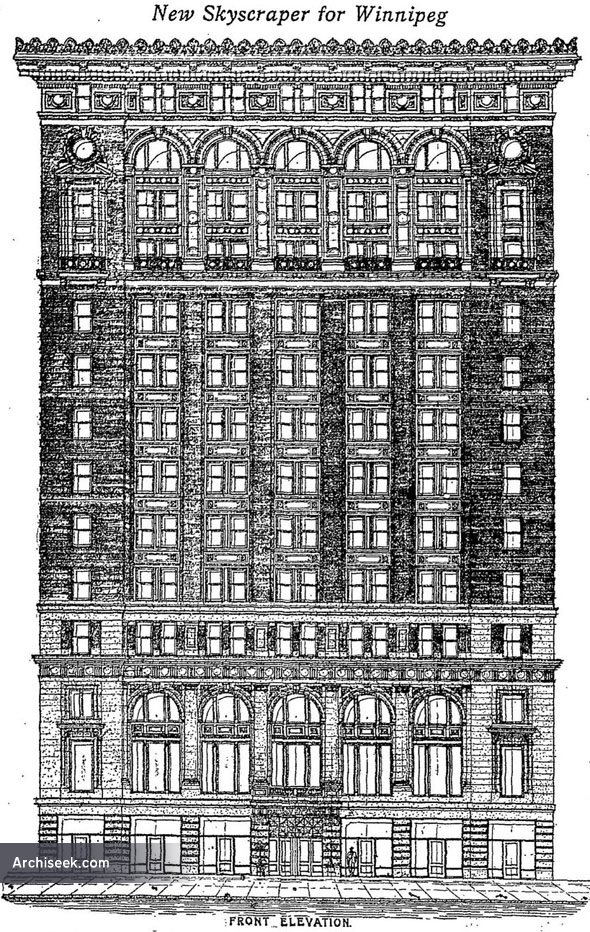 Unbuilt 14-storey proposal for an office building on the east side of Main Street, between McDermot and Bannatyne. The Canadian Wheat Board building was eventually constructed on the site in 1928.

Described as “Magnificent new modern, steel, fireproof, fourteen storey office building to be erected on Main Street between McDermott and Bannatyne avenues by A.M. Fraser, as a cost of, including site, nearly three-quarters of a million dollars. Work will begin about August 1. The plans for the building show it to be in design and inner appointments, one of the most modern and beautiful in Canada. The first three stories of the building will be of granite and above that of brick and terra cotta. In order to comply with building requirements, the material to be used will be the most durable and this will save much in repairs later. The corridors will have marble wainscoting to the height of seven feet and above that will be finished in glass. The floors ill be arranged to accommodate the small and large tenant. There will be four passenger elevators, the doors of which will be operated by compressed air. The heating apparatus will be under automatic control and 25,000 gallons of water will be held in tanks provided for the purpose to guard against fire. The building will be used for offices only. American railways with offices in the city have already applied for quarters.”