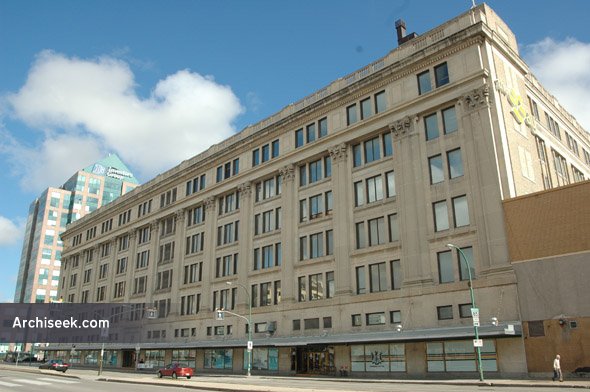 Founded in 1670, the Hudson’s Bay Company’s (HBC) chief interests for its first two centuries were the fur trade, exploration and settlement. After 1870, when its territory of Rupert’s Land was incorporated into the Dominion of Canada, its interests became more varied. Today, as Canada’s largest non-food retailer, it is best known for its national chain of department stores, the Bay and Zellers.

Designed by E.I. Barott of Barott & Blackader. Classicism was the architectural language of choice for the Hudson Bay Company, notably as their massive store in Vancouver. Here, as there, the building is six storeys in height. The two main facades are dominated by a giant order of Corinthian pilasters capped by a tall attic storey. Internally the building is typical of 1930s department stores with recent trends in department store organisation applied. Originally there was a plan to build a further four storeys on top of the current height.