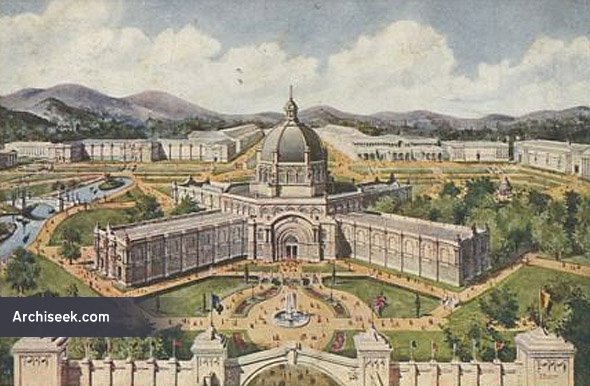 The leading force behind the project was William Martin Murphy, a prominent businessman and owner of the Irish Independent, Clerys, and the Dublin United Transport Company. The exposition ran from 4 May to 9 November 1907, and received 2.75 million visitors to the site which covered 52 acres.

The total cost of the exhibition buildings and enclosure of the exhibition site was £118,061 but additional expenditures on architects and surveyors fees, salary of Clerk of Works and other expenses brought the cost to £123,604. Consulting architects were Kaye-Parry & Ross for Humphreys of London.

The Grand Central Palace consisted of a pivotal octagonal hall 200 feet in diameter surmounted by a mighty dome 150 feet high, with four radial halls stretching 160 feet long by 80 feet wide. “Messrs. Kaye, Parry, and Ross, of Dublin, the consulting architects of the Irish International Exhibition opened in that city last week, write that the buildings are faced externally with fibrous plaster on similar lines to the Paris, St. Louis, and Glasgow Exhibitions, and that upwards of £100,000 has been expended on these buildings and grounds.” 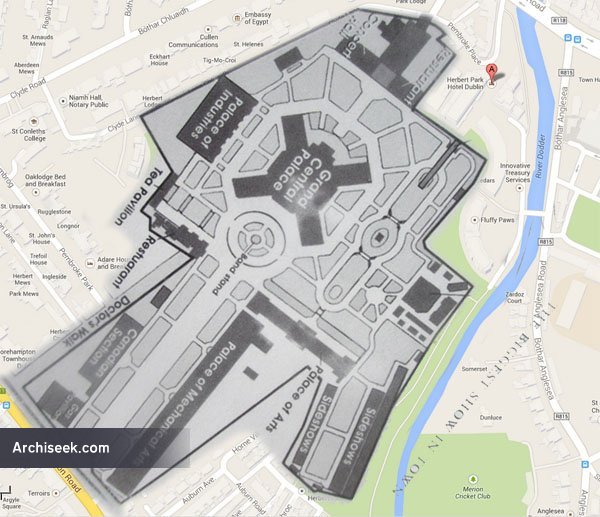 The Main Entrance Hall stood at the Pembroke Road and Clyde Road junction. It was an impressive towering building, Italian in style, with an arched entrance foyer and arcaded ground ﬂoor. Behind the entrance stood a colonnaded space, 80 feet by 80 feet and from this was a covered way 170 feet by 40 feet wide which led to stairways and slopes. From this, admission was gained to the Great Celtic Court which was 185 feet long by 92 feet wide.

“The Irish International Exhibition in Herbert Park, Dublin, formally opened on Wednesday, is housed in a building of unusual form, designed by Messrs. .T. Kayo Parry and Ross, of Dublin. On plan it is an octagon with four radiating limbs of equal length, the central hub being crowned by a dome, also octagonal in shape, and l1Oft. in height. The style is Renaissance. The world has been carried out in galvanised iron and wood, painted to represent stonework, by Messrs. Humphries, Limited. In the historical section of the exhibition there is a valuable diaphiy, including Napoleonic relies and articles of Old Irish silver and glass. The art gallery contains many of the world’s most famous pictures, and some of the greatest modern painters are worthily represented. Amongst the collection are to be seen Lady Butler’s ” Roll Call,” which has been lent by the King, and several canvases sent by the Prince of Wales, Borissoff’s “A Cemetery.” lent by the Tsar of Russia” The Building News. 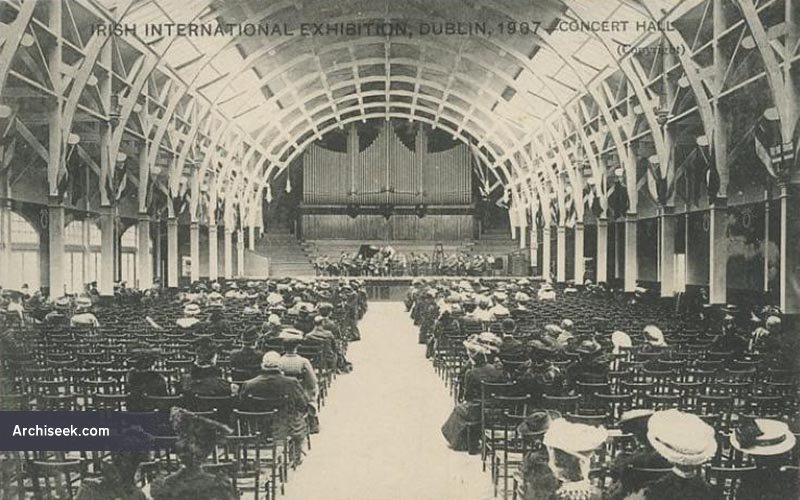 Beyond this lay the Concert Hall and the Popular Restaurant, each 170 feet by 80 feet. There was a large orchestra stage and an organ loft in the Concert Hall. The Pavilion or Palace Restaurant was a major building which contained dining halls and apartments provided for the expected visit of the King and Queen. Other buildings erected on-site included an open-air tea room which was 143 feet long by 45 feet wide.

“Dublin stands at the head of the a magniﬁcent estuary shut in to the south by an amphitheatre of mountains, and as the main entrance of the exhibition faces north, the visitor approaching or within the grounds sees the great range of snowy domes and pinnacles standing out start against the rising hills and towering into a sky of Irish blue – a blue which an American enthusiast poetically compared with ‘a colleen’s eyes’. The entrance building is a huge one, containing a great Concert Hall capable of seating over two thousand people, and a series of dining and refreshment rooms sufﬁcient to entertain a vast number of persons.” (From The Great White Fair by Bram Stoker in The World’s Work, special edition 1907)

The land used for the exhibition became Herbert Park, but the only remaining artifacts are a bandstand and pond. A further bandstand was relocated to Bray, and various smaller pavilions were reused in other locations.