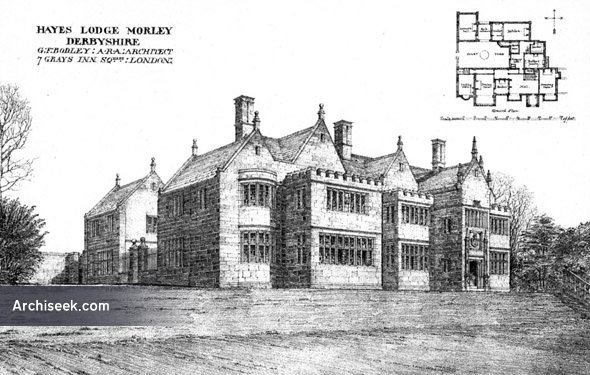 Large house on the Morley Sacheverell Estate, built between 1894-99 for H. A. Sacheverell Bateman by G F. Bodley and set in an estate of 325 acres. Formerly the gardens contained work by Lutyens. The house was owned for many years by the charity Dr. Barnardo’s. The house was later sold and returned to private ownership. Perspective view including plans published in The Building News, May 17th 1901.

“This house, also from the designs of Mr. G.F. Bodley, A.R.A., is built of red stone, and has a good deal of oak panelling internally. The bay windows are deeply recessed, and are all mullioned and transomed, and are fitted with lead lights, some having heraldic stained glass. The garden has been laid out in character with the house. The roof is covered with stone slates.”