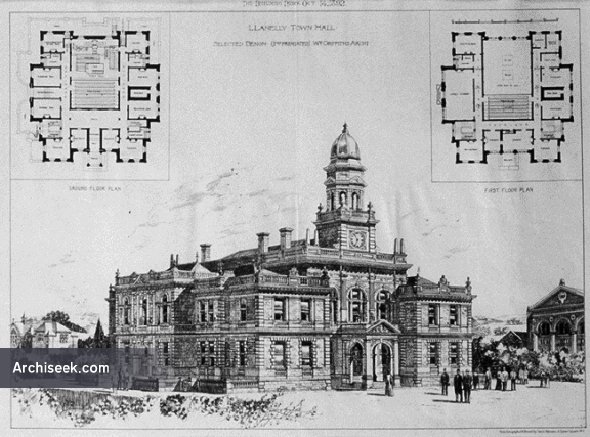 Selected design after a competition for a new town hall for Llanelli. In August 1892, the architect Charles Barry, appointed official adjudicator, considered the twentyfive plans submitted. The winning design was ‘Motto Equity’ submitted by Simon & Tweedie of Edinburgh, and ‘Falcon’ submitted by William Griffiths, Estate Agent of Thomas Street, Llanelli, was second. The Board did not make an instant decision and after lengthy discussions and great deliberations, it was decided to accept the design ‘Falcon’ submitted by the local architect. The decision to accept was carried by eleven votes to four. As compensation the first prize money of 50 guineas was given to Simon & Tweedie. The building was constructed and opened in 1896 and is still in use today.