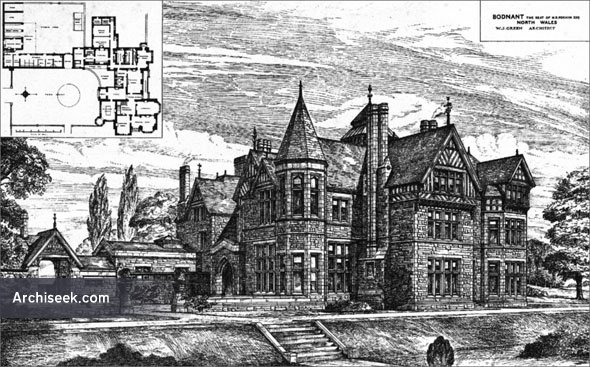 “Tins building, which has been erected for H. D. Pochin, Esq., is situate in a most picturesque part of the Conway Valley, at an elevation of about 200ft. above the river, and commanding, magnificent views of the Snowdon range. It is built on the site of an old house, which, however, possessed nothing of interest, and of which some minor portions have been worked into the interior of the new house. The walls are hollow throughout, and are constructed of a grey Chert stone quarried on the estate, and the whole of the moulded and dressed stonework is executed in Talacre stone. The roofs are covered with Welsh slates, and a certain relief of colour is obtained by the use of the half-timbered work in the upper portion. The surrounding country being very much broken up and richly wooded necessitated considerable play of outline in the general design, and especially in the roofs, to make the building harmonise with its surroundings. The work was executed by Messrs. Lucas Brothers, the architect being Mr. W. J. Green, of 8, Delahay-street, Westminster.” Published in The Building News, July 29 1881.