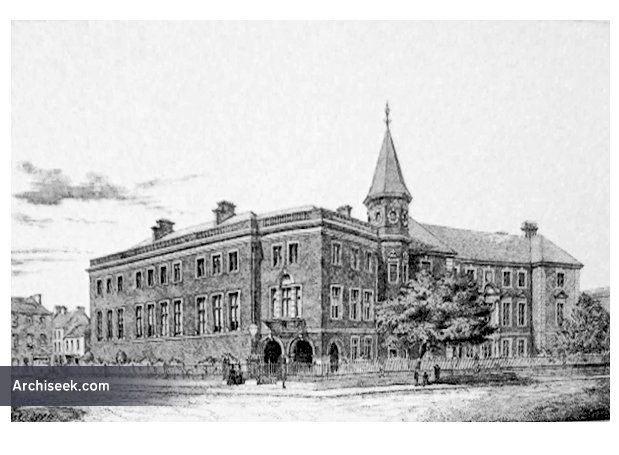 Perpective view published in ‘The Architect’ July 12th, 1889. Previously known as the Cork School of Art, William H. Crawford was induced to support an extension to the school in 1884. The extension of the Cork School of Art included several magnificent new purpose-built galleries and entailed the renovation of practically the entire building. As a consequence of this generosity, the new building was to hear his family name.

The extension was designed by Arthur Hill, of the architects firm of Hill & Co. It had originally been intended that the extensions and additions would include a School of Art and Science, but these proposals were scaled down, and the building was formally titled the Crawford School of Art. The architect’s scale model of the original proposed building is considerably more ambitious in scale and treatment than the extension actually completed. This model, and the ground plans associated with it, show that the design was to have several turrets, not just the one octagonal turret.

Hill successfully blended in the new extension with the old 1724 custom house building. It seems that he went to the trouble of refacing the entire existing building with the same new brick, in order that the two parts would harmonise. The octagonal tower on the present building (a feature characteristic of Hill’s architecture), marks the joining of the old Custom House / School of Design witht he new School of Art and Gallery extension.