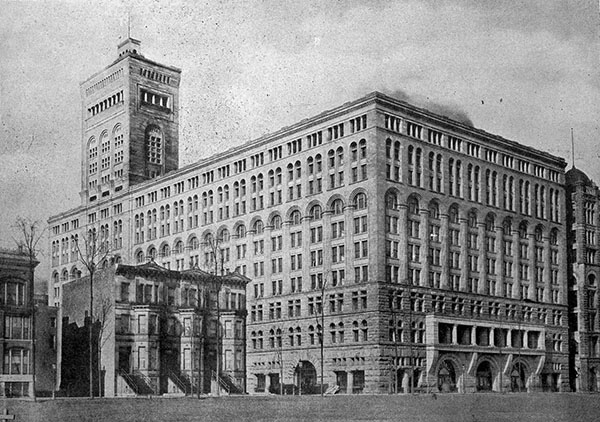 The Auditorium Building in Chicago is one of the best-known designs of Dankmar Adler and Louis Sullivan. Completed in 1889, the building was built at the northwest corner of South Michigan Avenue and Congress Street. It was added to the National Register of Historic Places on April 17, 1970.

Ferdinand Peck, a Chicago businessman, wanted to develop the world’s largest, grandest, most expensive theater that would rival such institutions as the Metropolitan Opera House in New York City. The building was to include an office block and a first class hotel.

“The Auditorium was built for a syndicate of businessmen to house a large civic opera house; to provide an economic base it was decided to wrap the auditorium with a hotel and office block. Hence Adler & Sullivan had to plan a complex multiple-use building. Fronting on Michigan Avenue, overlooking the lake, was the hotel (now Roosevelt University) while the offices were placed to the west on Wabash Avenue. The entrance to the auditorium is on the south side beneath the tall blocky eighteen-story tower. The rest of the building is a uniform ten stories, organized in the same way as Richardson’s Marshall Field Wholesale Store. The interior embellishment, however, is wholly Sullivan’s, and some of the details, because of their continuous curvilinear foliate motifs, are among the nearest equivalents to European Art Nouveau architecture.”
—Leland M. Roth. A Concise History of American Architecture. p. 179-80.

The Auditorium is a heavy, impressive structure externally, and was more striking in its day when buildings of its scale were less common. When completed, it was the tallest building in the city and largest building in the United States.