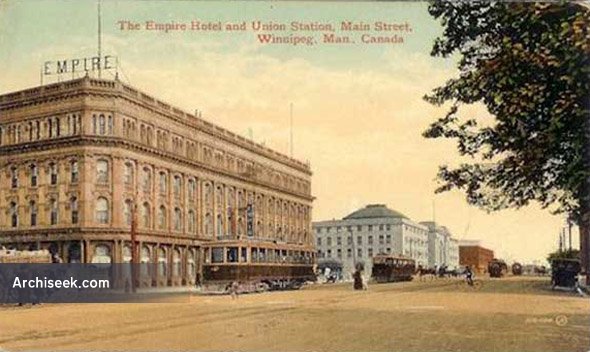 Originally conceived as the Cauchon Block, and then converted into an upmarket hotel in 1905 by architects Alexander & William Melville for the railway traveller. Ultimately the Empire Hotel failed to compete with the Royal Alexandra which opened in 1906, and later the Fort Garry. Eventually the hotel closed in the 1970s and by the early 1980s was due for demolition.

The exterior skin, however, was deemed a provincial heritage object by the government of Manitoba. This was due to its unique construction – being essentially a cast-iron and zinc kit of parts. Eventually a good proportion of the facade was dismantled and put into storage for planned re-use, where most of it still remains.

A portion was recreated to serve as the entrance to the Centre du patrimoine adjacent to the Franco-Manitoban Cultural Centre in St. Boniface. The site of the hotel, remains empty, used as a surface carpark.