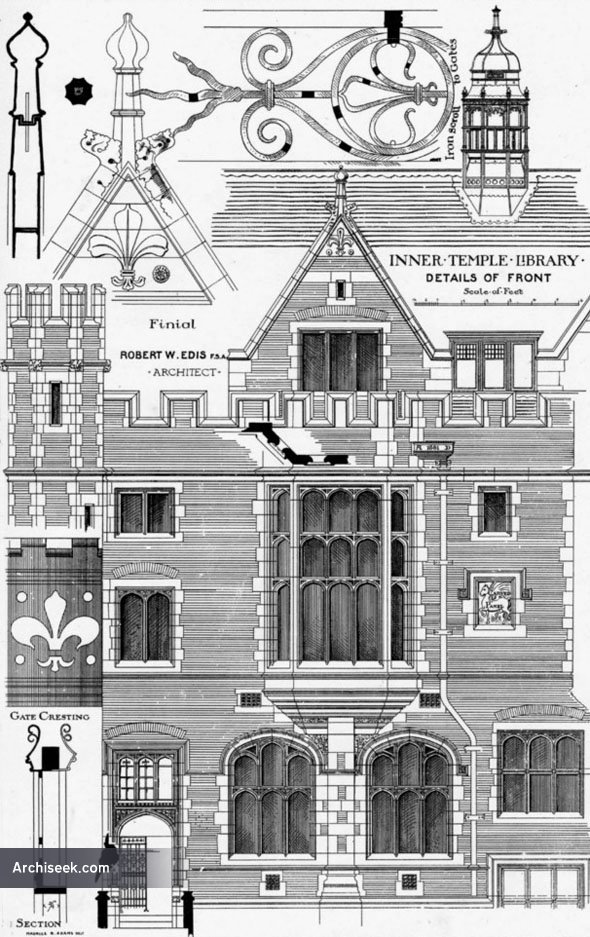 Details of front for new Inner Temple Library. “We give illustrations to-day of the additions that have been made to the Inner Temple Library in King’s Bench “Walk, from the designs by Mr. Robert W. Edis, F.S.A. The design was exhibited at the last Exhibition of the Royal Academy, and our double-page perspective shows the principal front facing King’s Bench Walk. The general arrangement of the new building, which forms an important addition to the previous library, a structure in modernised Gothic of a rather feeble type, may be seen by the plans of ground-floor and library-floor we give. The old library and the comer tower are united by a lobby, so that the three libraries can be brought into communication, though it will be noticed the new front is not exactly in the same lino as the old building. This difficulty the architect has met in a satisfactory manner by an octagon stair-turret at this point, which forma a pleasing break in elevation, and answers the purpose of the librarian and others. On the ground- floor the porch seen in our elevation opens into a lobby entrance, which will be paved with mosaic tiles, to the right hand of which is a lecture-room for GO students, with platform at one end. This room has a panelled plaster ceiling, and is to have a dado of oak panelling. The floor is slightly dropped at one end.

From Tanfield-court there is a separate approach to set of new chambers by a second octagon stair turret, which forms a projection on this front, giving access to the top floor above the library, which provide for an additional two sets of chambers, with conveniences. Ascending a concrete turret stair, or the main stairs in the corner tower, the visitor enters the new library, which forms two spacious apartments, each about 37ft. 6in by 22ft. 6in., having bay windows towards the main front, and lighted also from Tanfield-court. The chief architectural features are the panelled ribbed ceiling and the bookcases. The former is of plaster, relieved by oak ribs, dividing it into large and subordinate panels. A richly-moulded oaken cornice, mitring with the ribs, surrounds the rooms, and this is enriched by tome fine carving and a bottom battlemented member, while the main ribs have carved roses at the intersections. The bookcases, which are executed in oak, are in keeping with the style, and a gallery surrounds the rooms, approached by stairs, which are ingeniously contrived between the bookcase and centre wall. The lofty oriel windows have groined ceilings, and the lights arc intended ultimately to be filled with armorial bearings in coloured glass. The spandrels have been richly carved, and the plain sides are relieved by panelled tracery.

The stonework of the«e bays is internally of Beer stone. The archway between the libraries is also of stone, panelled, and double iron doors, working in grooves or cavities, are provided to insure safety from fire. We may also notice here that with the same object the main floors are constructed on the Dennett system ; the iron girders being also entirely embedded in the concrete. In the recos.