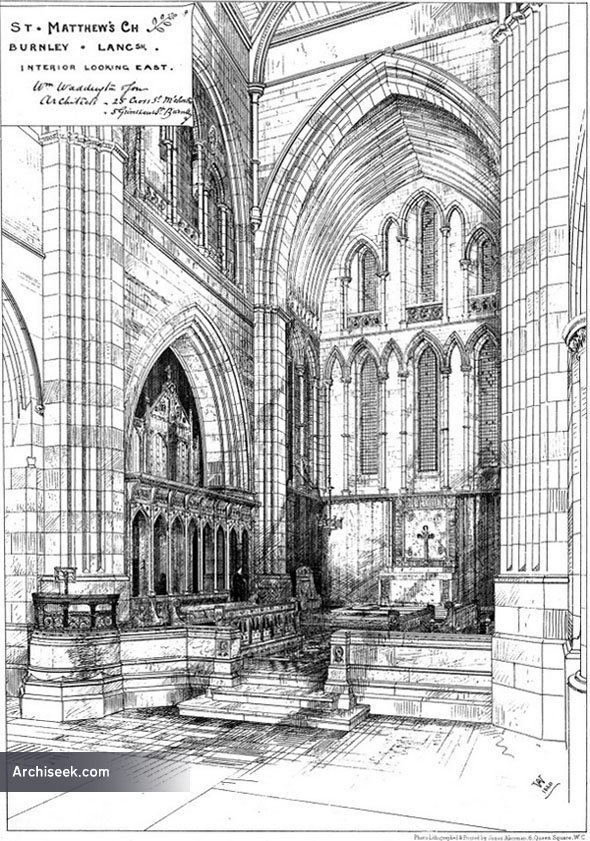 The original building was designed by William Waddington, who was a local Victorian architect, responsible for many of the buildings in Burnley town centre. St Matthew’s contained some notable stained glass by both Kempe and Burne Jones. Electric lighting was installed in 1924, but this was to be very problematicleading to a fire in Christmas Day 1927 which destroyed the interior. A replacement church by Austin and Paley was constructed on the site.

Interior view published in The Building News, June 3rd 1881. “This church was consecrated a little more than a year ago. The north aisle, octagonal vestry, and tower over the western bay of chancel have still to be added. The cost has been about £8,000. Sittings are provided for over 500 worshippers. The nave is 80ft. long by 2ift. 6in. and the chancel 40ft. by 22in. The chancel is lined with chiselled stone. The screens and stalls are executed in Dantzic oak. The floors are covered with Godwin’s tiles. The parapet and steps to chancel and sacrarium, are in marble and alabaster, and the pulpit is in iron and brass, with oak rail.”