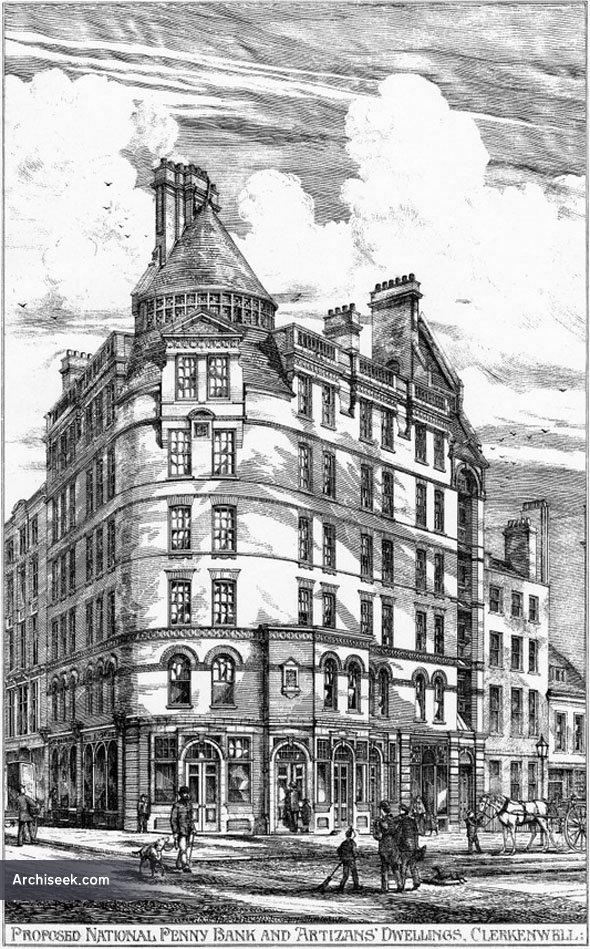 Illustration in The Building News, October 29th 1880. According to The Builder, August 7 1880: “This extensive pile of buildings, at the oorner of St. John’s-square and Clerkenwell-road, has been opened for business and occnpation. The buildings were to have been opened by H.B.H. the Princess Christian, but owing to her Royal Hjghness’s other engagements, the formal ceremony had to be deferred.

The ground and first floors of the building are used for the purposes of the National Penny Bank and three shops, the whole of the upper part of the building (i.e., the second, third, fourth, and fifth floors) being planned for artisans’ dwellings,—two sets of two rooms and two sets of three rooms on each floor, with w.o. to eaoh set of rooms. The floor of the seoond story, separating the artisans’ dwellings from the bank premises, is fireproof, formed with 6 in. by 2 in. rolled iron joists, 12 in. apart, filled in with selenitic cement conorete, and covered with joists and wood flooring. The roof flat is also of the same construction, but covered with Lawford’s patent asphalte, to form a drying-ground. On the roof fiat is the laundry, formed with framed timber, roofed with corrugated iron, and fitted up with four coppers, the water being laid on to each. All the rolled iron joists are supported on cast-iron columns and stancheons. The main staircase is constructed of Portland stone, running in continuous flights from basement to roof, with wronght-iron grille on each landing. Each set of rooms is furnished with cupboard, larder, and coal-cellar. All the rooms are plastered and papered throughout, the corridors having a cement dado 4 ft. high, and painted. At the end of eaoh corridor is a dust-shaft fitted with wrought-iron door, the dust descending to a place provided for its reception in the basement. The roof over the staircase is covered with Broseley tiles. Ventilating pipes are carried from eaoh w.o. to the highest point of the roof, also from the sinks in sculleries.

Externally the facings are stock bricks and terra-ootta dressings, relieved with terra-ootta string-bands 12 in. square, each bearing the device and inscription of “The National Penny Bank.” The bank portion of the building has a large projecting bay and circular oorner, built with red brick and terra ootta. The building has a frontage of 140 ft., and a height from the ground line to the top of the parapet of 70 ft. The foundation-stone was laid in August last by her Koyal Highness the Princess Christian.

The building has been designed by Messrs. Hen man & Harrison, architects. Mr. F. Dashwood has acted as clerk of the works, which have been executed by Messrs. Aitohison & Walker, of William-street, St. John’s Wood, Mr. W. Woolacott being their foreman.”

The building still exists but minus the ornate roofline and turret on the corner.