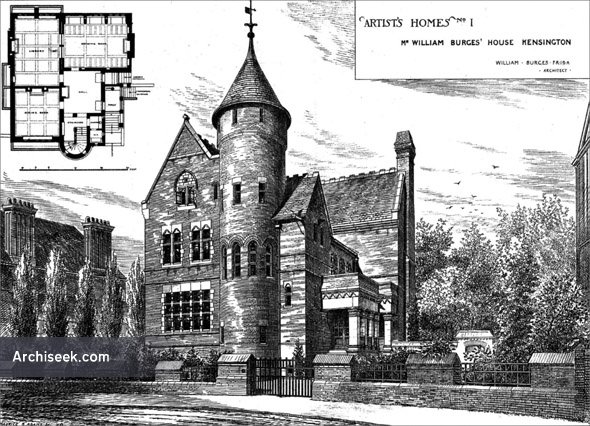 The Tower House was built between 1876 and 1878 in the 13th century French gothic style, by the Victorian architect William Burges for himself. Burges purchased the plot of land in 1875, the house was substantially built by 1878, and the decoration of the interior, together with the designing of innumerable items of furniture and metalwork continued until Burges’ early death in 1881. Burges’s career was in decline, from 1875 onwards he received no major commissions, and the construction, decoration and furnishing of the Tower House filled much of the last six years of his life. The exterior is dominated by the picturesque brick tower with a conical roof. The real glory of the house is the interiors – as historian Gavin Stamp described it: “All the rooms tell a story…. Burges finished his own bedroom so that he could imagine himself – when in an opiate haze – att he bottom of the sea”. Perspective View including ground plan published in The Building News, April 23rd 1880.