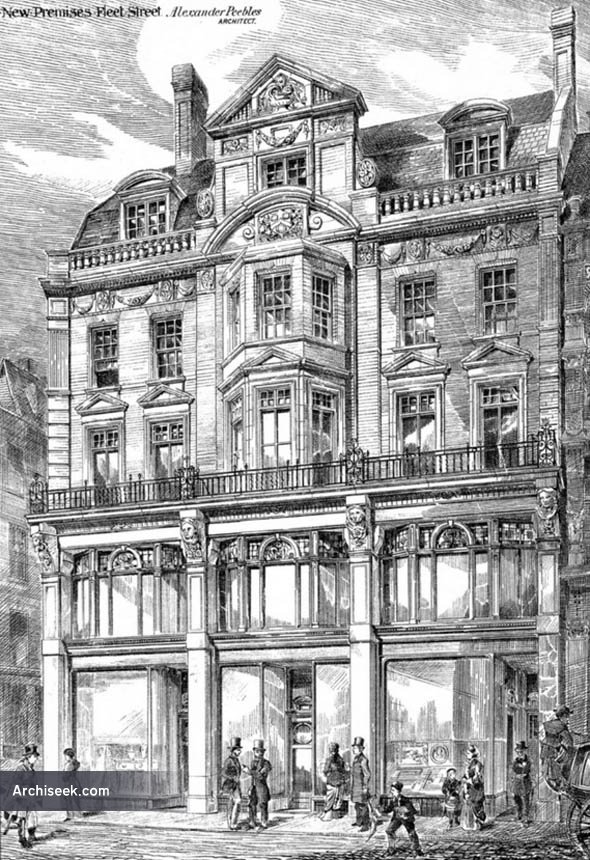 Perspective published in The Building News, September 19th 1879. Alexander Marshall Peebles was born in Dawsholm, New Kilpatrick, Dunbartonshire on 5 March 1840. He was articled to Thomas Smith, County Surveyor of Hertfordshire, and subsequently worked as assistant to Henry Baker, Surveyor of St Pancras. He was admitted ARIBA on 8 April 1867, his proposers being Smith, Robert Kerr and H Whichcord, and was elevated to FRIBA on 10 February 1879, his proposers being J Whichcord, Octavius Hansard and Robert Hesketh. He practised as an architect in London, and was appointed District Surveyor of North St Marylebone and later of East Hampstead. He was Architect to the Corporation of the City of London from 1887. He died on 21 May 1891 and was buried at Kensal Green Cemetery.

“Our illustration is a view of the large pile of buildings recently erected in Fleet-street. This version of the Classic style, possessing affinities with the Queen Anne and Renaissance, was adopted by the architect to aid in keeping alive the historic reminiscences of this ancient highway. The bricks used are of a deep red tint, and are pointed with a pink joint. The dressings are of Drumfries red sandstone, the pilasters and entablature which comprise the ground and first floor being formed of Ross of Mull polished granite. The carving is executed in high relief : the three national emblems are introduced in the frieze under the main cornice, characteristically treated, and the Aims of the Vintners’ Company, who are the ground land- lords, are displayed to advantage over the central bay windows, upon a shield surrounded with foliage and grapes. Upon the large trusses over the first floor are sculptured, double life-size, the busts of Wren, Johnson, Goldsmith, Caxton, Hogarth, Dryden, and Milton, celebrities formerly residents and habitues of this locality. The shop-fronts are of American walnut, with wainscoat and mahogany panels, and ebony fillets to the sashes. Stained glass in foliated lead frames has been used with good effect in the fanlights. In place of the unsightly shutters so Generally in use, wrought-iron grilles have been fitted for the protection of the shops at night, and are so constructed as to allow of their being raised and lowered from the basement. This block of buildings covers an area of 12,000 superficial feet, and the works have been carried out from the designs and under the supervision of Mr. Alexander Peebles, F.R.I.B.A., of 3, Salters Hall-court, Cannon- street.”