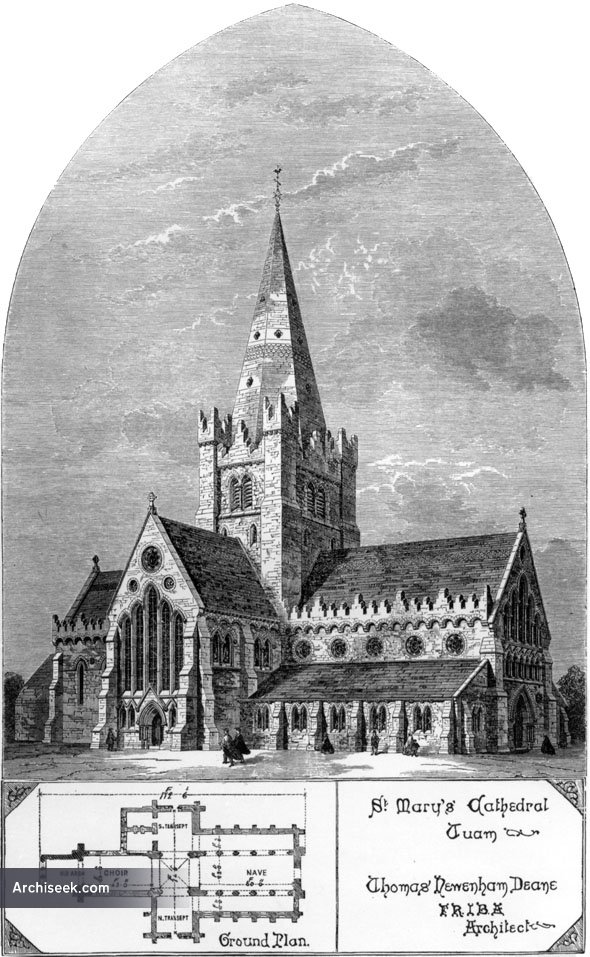 This, the third Cathedral to be built in Tuam, was built on the site of the first cathedral and incorporated a Hiberno-Romanesque arch that remained onsite. Constructed for the Church of Ireland, the building is 150 ft. long, and the transepts 75 ft. wide with a tower and spire over the crossing. The rounded chancel arch is of red sandstone, with six consecutive semi-circular arches of elaborately ornamented stonework supported on columns.

“Messrs. Deanes design is essentially an Irish cathedral, in plan and style: the cathedrals of Kilkenny and St. Patrick, Dublin, having served for models in many respects. The highly characteristic crenellated battlements have been adopted through out. The church is cruciform, and consists of a choir fitted up with the bishop’s throne, stalls, subcellae. &c., extending to the eastern arch of the central tower. The choir is 43 feet long and 23 wide, transepts 29 feet wide, nave, having five arches, 23 feet wide, aisles 11 feet. There are no aisles to the choir, but on the south side are a vestry for parish purposes, and a robing room. The organ is over the parish vestry, its pipes shewing into the choir and east side of the south transept. The choir will be separated from the nave only by a low screen, extending as far as the stalls—viz., about 4 feet at each side, the central part being entirely unscreened. The congregation will occupy four bays of the nave, the transepts. the space under tower, and the part of choir un-occupied by the members of the cathedral establishment. The pulpit would be placed near the north-east pier of the tower, so as to be perfectly visible from any part of the building.

The roofs are open timber, for economy; but it was strongly re commended to groin the choir at least. Early 13th century is the date of the style adopted.” The Irish Builder, September 15 1861.