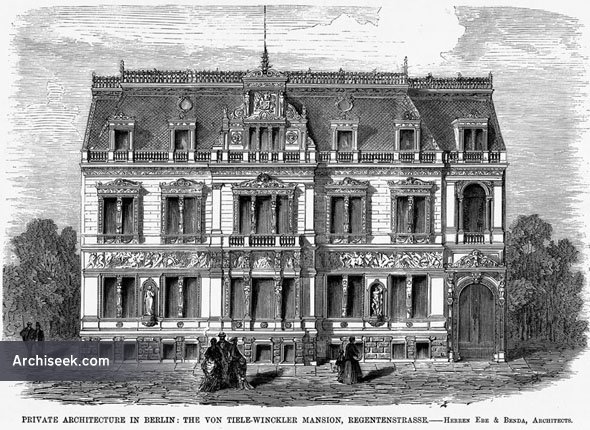 From the 1820s onwards, members of Berlin`s middle class moved in increasing numbers to Friedrichstadt and built two to four-storey villas with large and decorative gardens. The area subsequently developed into Berlin`s prime residential area. Around the turn of the century, more and more foreign countries transferred their representations from the traditional embassy sites near the Reichstag and on Unter den Linden and Wilhelmstraße to the splendid residential palaces around Regentenstrasse. Leading the way was Imperial China, which transferred to a site on Von-der-Heydt-Straße in 1888, and Spain, which acquired the Tiele-Winckler Palais on Regentenstraße (now Hitzigallee) in 1898. Demolished and rebuilt in the late 1930s. Illustration published in The Builder, September 8th 1877.