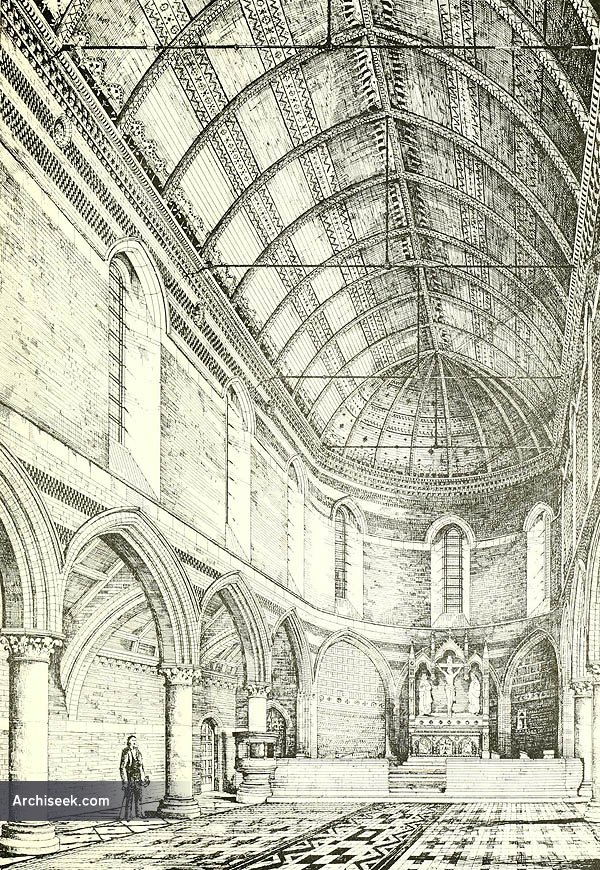 From The Building News: “This church was opened the week before last, and has been built from the designs of Mr. R. J. Withers, architect. The site on which the building stands is immediately over the Metropolitan District Railway, so that difficulties of an unusual character had to be overcome in formlng the foundations. They were met, as we described at the time, by excavating trenches down to the haunches of the railway arch under the nave arcades, and constructing large concrete arches, so as to carry the nave arcades in a perfectly independent manner with regard to the tunnel, .so that the latter can be repaired at any time without affecting the foundations of the church. The church consists of a nave, 73ft. long by 32ft. wide, and 39ft. to top of wall plate ; aisles ft. wide as passages and an apsidal sanctuary, the chancel extending west one bay of the nave arcade, and separated from the nave by a dwarf stone screen. Vestry and sacristy are placed at the north-east corner of the building. Heating is carried on by hot-water pipes. The whole of the flooring is of encaustic tiles, under which is a bed of concrete 1ft. thick, to prevent as much as possible the sound being heard of the trains passing below. The church is fit by clerestory and end windows ; the aisles are windowless. The mate- rial of the walls inside and out is red brick with stone dressings. The roof is covered with slates, and is surmounted by a fleche. Sit- tings are provided for 492 persons. The cost has been about £5,000. The builder was Mr. Cow- land, and the clerk of works, Mr. Laidler.”