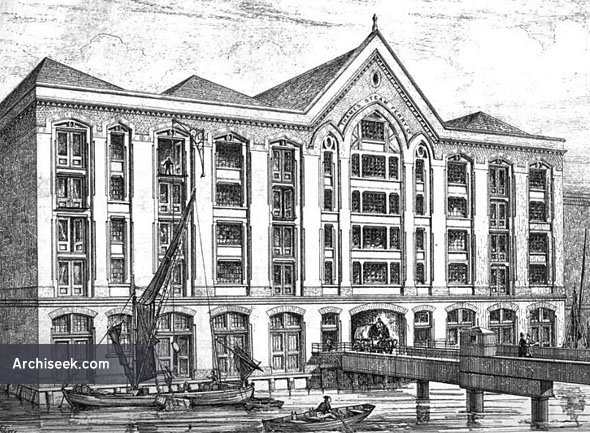 From The Architect, November 13, 1875: The Thames Steam-Ferry Company propose to erect warehouses i on the land they have taken at the Tunnel Wharf, Wapping, and at Church Stairs Wharf, Rotherhithe. The plans for the new buildings have been prepared by the Company’s architects, Messrs. A.R. Stenning and ,T.B. Tyerhan, of 157 Fenchurch Street, E.C. The first portion of the buildings, consisting of a new river wall in front of the Tunnel Wharf, with the necessary engine and accumulator houses for the hydraulic machinery, are now in hand, Messrs. Heitet Lee & Son, of 6 Westminster Chambers, Victoria Street. Westminster, being the contractors. The warehouses will be faced with picked Kent stocks with red brick arches; the cornice to ground floor will be formed with red Dumfries stone for mouldings and neckings, with brown Portland stone for fascia ; the main cornice will be formed with ornamental moulded red bricks and red Dumfries stone weathering, and Pethek’s pressed bricks worked in under neck moulding and above the top floor arches; the ground floor will be 17 feet in height in the clear to allow loaded vans to pass under, and the first floor will have fireproof flooring, the ironwork being supplied by Messrs. E. Moreland & Son, of Old Street, St. Luke’s.