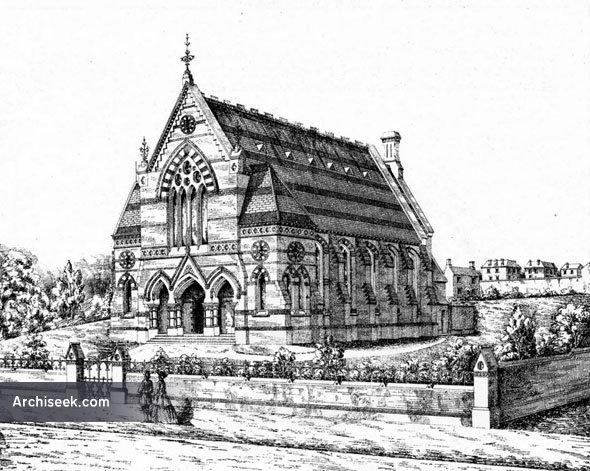 Now known as Wesley Place Methodist Church. Published in The Building News, April 8th 1870. “THIS chapel (with which it will be seen a school
is combined) occupies a commanding position in the main road through the village. The design which has been prepared by Mr. George B. Ford, architect, Burslem, Staffordshire, is in the Gothic style, the chief peculiarity being that whilst strictly characteristic of that style, all obstructions to sight or sound are obviated, which in medieval architecture are so prevalent. The arrangement of plan is that of a parallelogram for the chapel.

The materials used have been pressed red bricks, relieved by brick bands of other colours, and Hokkington stone dressings. The inside dimensions of the chapel, including portico, vestibule, and vestry, but exclusive of school-room, is 83ft. 6in., and the width, exclusive of buttresses, is 38ft. 8in., and will accommodate 400 persons. The main front of the chapel is divided into three bays, the centre bay being carried up as a gable, and the side bays being the gallery staircases, the roofs of which are hipped. The main feature in the front of the building is the entrance to the portico, which is composed of stone arches finished with moulded labels with carved bosses, resting on three stone piers, having foliated caps and moulded bases.

The centre arch of the porch entrance is carried up in a pedimental form, and the spandrel is filled in with carved foliage. In the upper part of the gable is a four-light traceried window with label mould round the arch. The gable is finished with moulded stone coping, springing from panelled and canopied knees, and terminating with saddle stone and iron vane. The stair- cases, which are carried up in the side bays, form a square on the plan and materially add to the good effect of the front of the chapel ; they are finished with hipped roots, springing from moulded brick cornices, resting on panelled stone frieze, under which is a moulded brick string. Each roof has an iron vane. The staircases are lighted by lancet windows, with small wheel windows over the same.

The sides of the chapel are each divided into five bays by buttresses projecting boldly from the wall line and ascending in two set-offs, having slopes of black brick, which will be of greater durability than stone ; each bay contains a two- light ». ‘ow, with traceried head. At the east end of the chapel, viz., behind the rostrum, is the orchestra, semi-octangular in shape, and underneath this is the minister’s vestry, and at the roar of the vestry is the school -room for the accommodation of 100 children, the roof of which, being lowest, is hipped and finished with an iron vane. Above this roof rises that of the orchestra, which is finished in the form of a gable. The roof, which is 36ft. in span, is formed without any horizontal tie, and whilst having a pleasing effect, is so constructed as to prevent, as far as possible, any reverberation of sound, and to afford, by means of a very simple and inexpensive contrivance of revolving shutters, a means of thoroughly ventilating the building without draughts.

The body of the chapel is approached from an op«n portico, 7ft. wide, which leads into a vestibule 6ft. wide, and in this vestibule are folding doors, with swing hinges, so arranged as at all times to prevent cold currents from communication with the interior of the building. From the portico ascend staircases to the gallery. The woodwork of the interior of the chapel is of pitch pine and red deal,i stained and varnished, the pews and free seats being alike made with sloping backs. The rostrum, which is of a neat design, is of pitch pine.

The floor of the chapel, both to the pews and the aisles, slopes down from the vestibule to the communion, thus affording to persons sitting the most distant from the minister an uninterrupted view. The windows are glazed with cathedral tinted glass, the margins being of crimson coloured glass, in leaded quarry lights. The building is heated by hot water, and has been erected by Mr. John Stringer, of Sandbach, under the superintendence of the architect, at a cost of £1900, including fencing. The total cost, in. elusive of the land, however, is upwards of £2300. “