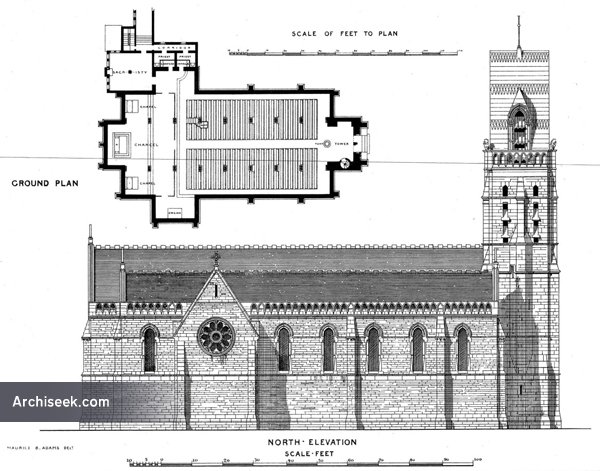 Founded when Jesuits who had been expelled from Germany in 1872 and settled in Ditton. The church was constructed between 1876 and 1879, cost £16,000, and was funded Lady Mary Stapleton-Bretherton of Ditton Hall. A cruciform church, with short transepts and a west tower, built in red ashlar sandstone with a slate roof. The tower is in three stages with a steep saddleback roof. The interior is barrel vaulted, boarded with hardwood, running through the nave and chancel. In 1979 the interior of the church was reordered by Bartlett and Purnell. Grade II* listed.

Clutton was a pupil of Blore from 1835–40, he commenced his own practice in 1844. He won first place in the Lille Cathedral competition with William Burges (his partner from 1851 to 1856). His pupil and assistant was John Francis Bentley, with whom he built the delightful little RC Church of St Francis of Assisi, Notting Hill, London (1859–60). Clutton was responsible for the heavy Romanesque cloister at the Birmingham Oratory (1860). Illustrations of his church at Ditton Hall published in The Building News August 22nd/29th, and October 10th 1879.

“This church, of which we give an illustration this week, is situated at Ditton Hall, near Widnes, Lancashire, and is built from the designs of Mr. Henry Clutton, 9, Spring-gardens (late of 9, New Burlington-street, W.,) at a cost of about £20,000. Externally, the edifice is faced with local red sandstone from the Rainhill quarries. The ashlaring is in straight courses, varying from 7 to 13iin. in height. It has a batted face, and the beds and joints are finely worked, set with a close joint, and afterwards raked out. The dressings are very carefully worked, and have a rubbed face. All the gutters and down pipes are of lead. The roof is covered with Bangor Countess slating. Internally, the stone used is Corsham. The shafts of the arcading at the east end and in the chancel are of Emperor’s red marble. The ceilings of the aisles, and the roof of the nave, are covered with oak boarding in narrow widths. The two folding doors in the tower entrance are of teak, and are so constructed that they open inwards and outwards. The other doors are of oak. The fittings to the doors, the saddle bars to windows, and cross to tower, are executed in gun-metal. The floor, together with the steps, is paved with rubbed York stone, with the exception of that part under the seats, which has a boarded floor. The seats have been placed in the nave only, the aisles being utilised for altars. The whole of the above works have been executed by Mr. Albert Kimberley, of Banbury, Mr. Thomas Burton being the clerk of the works.”