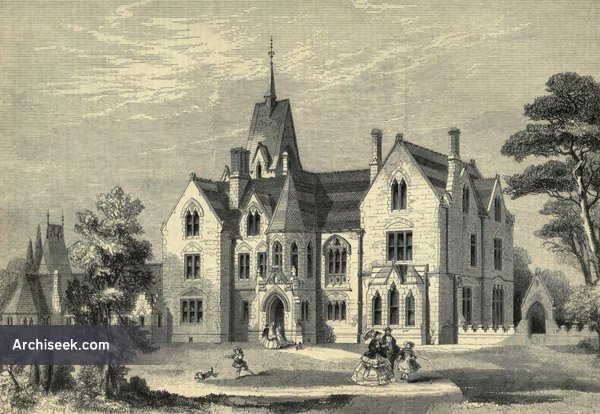 This building, of which we give an Illustration, is now in course of erection at Stratton Audley, near Bicester, in Oxfordshire, and is rapidly approaching completion. It stands on a site selected some years ago, commanding extensive and beautiful views, and approached through a handsome avenue.

The principal apartments are on the ground floor, and comprise a library and billiard- room facing to the north and west, 22 feet 9 inches by 17 feet 6 inches, with a large bay window ; a drawing-room 28 feet 9 incites by 18 feet 9 inches, also with a bay window, and having a west and south aspect ; a dining-room 29 feet 9 inches by 18 feet, having a south aspect; a breakfast- room 16 feet by 18 feet, with windows to the south and east, and a private study. These rooms connect with a lofty entrance-hall, having a panelled ceiling, and containing the principal staircase, and over them there are two stories of bed-rooms. To the east of the main building arc the kitchens, dairy, and offices, and detached from them, but in the same direction, stabling, coach-houses, &c.

The materials employed are, for the rubble work a local limestone of a fine blue color, and for the dressings, box-ground Bath stone, the internal walls being executed in brick. The limestone has been laid in regular courses with squared beds and joints, but the natural cleavage has been most carefully preserved on the face, imparting an interesting play of light and shade to the masonry, far beyond what the most careful dressing could produce. The roofs “are covered with tiles, partly ornamental and partly plain. The porch is to be paved with Warwickshire blue and white stone” in diamond pattern, and the same material is to be employed for some of the hearth-stones.

The method adopted in carrying out the works at this house is one more usual a century ago than at the present day. No general contractor is employed, the proprietor purchasing such materials as the estate does not produce, and employing his own workmen, placed under the orders of an experienced foreman, and directed by the architect. One advantage of this system is that it encourages the proprietor to develop the local re- sources of the estate, and rarely, if ever, has this been more energetically and successfully done than in the present instance. Tlie rubble-stone, already alluded to, is quarried near the house, and hearth-stones, slabs for chimney-pieces, and shafts to be polished and employed internally, have been got out of the same quarry. All the gravel and sand for mortar, plastering, and concrete has been dug, and all the bricks, roofing tiles, and flooring tiles, and part of the drain tiles, are made within a quarter of a mile of the house, and the lime has been got and burned within the limits of the property, from which have also been obtained all the poles for scaffolding, a large proportion of the oak employed, and elm, black poplar, and some other varieties of timber.

It may be interesting to some to mention that in the course of dressing one of the blocks of hard limestone for the walls, and a block to all appearance perfectly sound, a blow of the chisel laid open a small cavity with a crumbly earthy sort of lining, in which was discovered a live toad. The creature, when first taken out, was extremely shrivelled and shrunk in appearance, and perfectly motionless ; it however, in a few minutes, began to look and crawl about, and soon after swelled up to the natural size. The toad lived for some days, appearing perfectly sensitive to the light, and showing nothing remarkable except that it was never seen to open its mouth in the slightest degree, nor could any opening be observed to exist in the region of the mouth ; it ultimately, however, died, and has been preserved in spirits.

The hot-water apparatus to heat the corridors and conservatory of this mansion is being supplied by Messrs. Grainge and Co., of Uxbridge, and some metal finials by llr. Skidmore, of Coventry. The general foreman, whose duties have been very efficiently performed, is Mr. Joshua Lewis ; the architect is Mr. Roger Smith, of 57, Strand, London ; and the grounds and garden are being laid out under the direction of Mr. Marnock, of the Botanical Gardens, Regent’s-park.

The view we engrave is taken from a drawing in the exhibition of the Royal Academy, just closed. It shows the north or entrance front and the west end of the building.