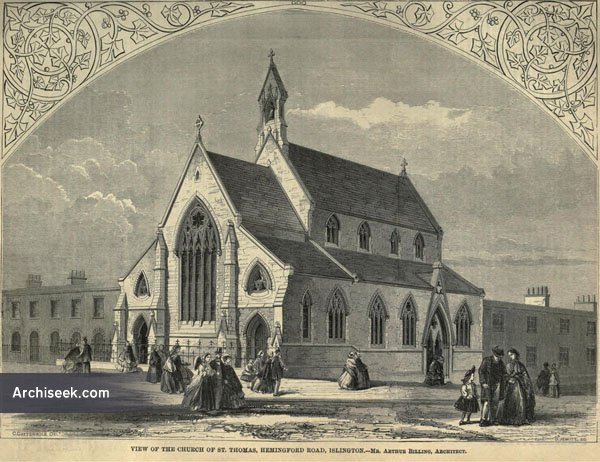 Demolished 1947, presumedly as a result of war damage. According to The Building News, “The new church of St. Thomas, Hemmingford-terrace, Islington, has been completed, and was consecrated by the Bishop of London on the I2th instant. The edifice is of the Decorated Gothic style, and consists of nave and chancel 87 feet long and 20 feet wide, with north and south aisles of about the same length and 12 feet wide. The aisles and west end of the church have galleries, which are approached by stone staircases at the ends of the aisles. The principal entrance to the church is through a deeply moulded and recessed double doorway on tlie nortli side. The nave is divided into five bays, supported by columns alternately circular and octagonal, with high pointed arches. The chancel arch, 45 feet in height, is carved one bay westward into the nave, at the steps of which stands the stone pulpit, of au hexagonal shape, with carved panels and columns at the angles, with sculptured angels and foliage introduced. At the east end of the chancel, and occupying nearly the wliole of the wall is a large five-light window. At the west end oif the chancel is a large circular window of the same diameter and filled with tracery. The sides of the church are lighted by four clerestory windows on each side of the nave, and by three large three- light windows on the south side, and four similar ones on the north side, all of varied design in tlieir tracery. The whole of the windows are filled with green cathedral glass and white glass borders, except the large circular portion in the east window, which has been filled with stained glass containing the subject of our Saviour’s resurrection, by Mr. Warrington, the gift of the architect, being one of a series of subjects intended to illustrate the life of our Saviour. The whole of the roofs are of stained deal open framing, and the height of nave is fifty-seven feet from floor to ceiling ; that to the chancel is formed of moulded panelled compartments. Upon the outside above the chancel arch, is a small decorated stone tuiTet about 80 feet high, with one bell. The small funds at the disposal of the Committee prevented the erection of anything like a tower or spire. The sittings are open, of deal, stained and varnished, and will accommodate nearly 1,000 persons, about I/O of these being for the school children. The church is built of Kentish ragstone, with Bath stone quoins and dressings from the Corsliam-down quarries. The works have been executed by Dove Brothers, builders, Islington, at the contract amount of £3,375, from the designs and under the superintendence of Mr. Arthur Billing, now of the firm of Newman and Billing, architects and surveyors, Adelphi, and Tooley-street, London-bridge, E.G. An illustration of the church will shortly appear in our pages.”