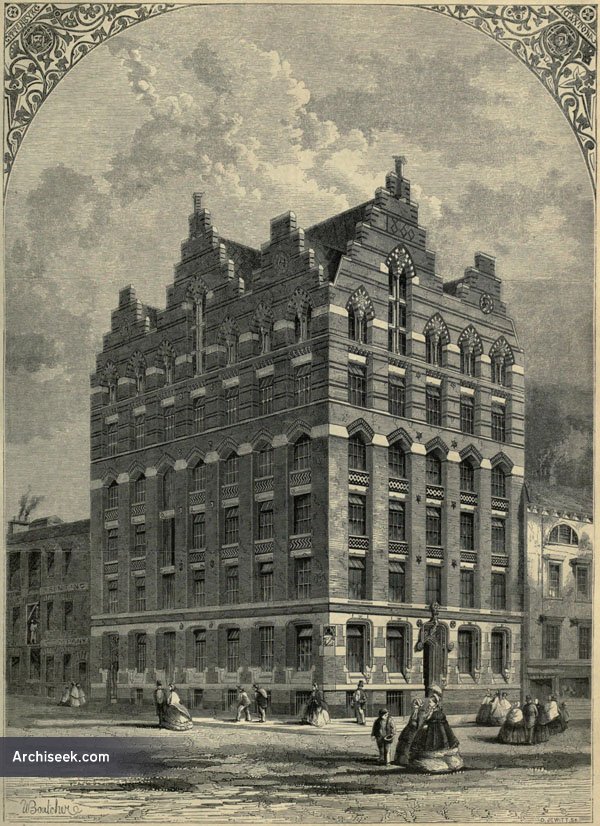 From The Building News: “THE Trustees of Cart’s charity have nearly completed, at the corner of Charterhouse-lane and St. John-street, Smithfield, the new premises leased by them to the London Printing and Publishing Company. It is one of the most conspicuous buildings in the City, not only on account of its great height, but of the originality and good taste which it displays. It occupies a rectangular site with a frontage of 50 feet in St. John-street, and 69 feet in Charterhouse-lane, where it joins the extensive premises already in the Company’s possession. The St. John-street front is rather richer than the other, but enough decoration is given to that in Charter- house-lane to preserve the unity of the design. The principal entrance is in the central of the five bays into which the St. John-street fayado is divided. The workmen’s entrance is in the last of the seven bays in Charterhouse-lane. Previous to describing the exterior of the building we will notice the general arrangements on each floor for the convenient and easy transaction of the Company’s business. From the entrance in St. John-street wo pass into a square lobby with wooden panelled ceiling and partitions, which communicates with the whole of the ground-floor. The counting-house, waiting-room, clerk’s counting-house, ofiices, &c., are here provided.At the far end, where a door opens into the Company’s old premises, there is a lift connected with all the different floors. A door also leads to the workmen’s entrance and staircase, which is built of stone and enclosed by brick walls to render it fireproof, and thus avoid the danger which a sudden panic might create amongst so large a body of workpeople as will hero be daily assembled. Two rows of iron columns run from the front to the back of the premises. They are made somewhat ornamental with rounded corners and moulded caps. They carry the wrought-iron girders which run transversely across the floor.

These columns and girders are repeated in each story ; the columns of the upper stories are let into the heads of those below, and the girders are bolted securely together and to the boundary walls, thus knitting the various parts of the building into one solid mass. The columns are supported in the basement by massive piers 3 feet thick, built of blue Staffordshire iron bricks, surmounted by blocks of Cheesewring granite. All the openings have inverted arches, and’ concrete is placed under all the walls. Every precaution has been evidently taken to render the building substantial ; notwithstanding its almost unprecedented height, not a single settlement of even the slightest kind has occurred in any portion of it. The basement is 1 1 feet high ; it is divided into a strong room, perfectly fireproof, for the stowage of stereotyped plates and books, a store for paper, and .another for ink. There is likewise in the basement a boiler-house, with the cellar for coals, &c. On the first floor we find the board-room at the north-west corner, and 4 rooms running thence along the whole of the Charterhouse-lane front are appropriated to authors. The rest of the first floor is devoted to printing, engraving, and stock. The second floor is reserved for bookbinding in its several branches ; the third floor to stock and lithographic printing ; the fourth to stock and engraving j and the fifth to copper-plate printing. Thus it will be seen there are no less than seven stories to the building (including ground floor and basement, varying in height from 1 1 feet 6 inches to 1 2 feet, and when we mention that each floor is carried over the one beneath it by iron columns and girders, our readers can judge of the care and skill which the builders must have displayed. The upper story is open to the timbers of the roof, and is thoroughly ventilated by flat windows in it, and by the flues in the side wall, which effectually ventilate the other floors. Eresh air may further be admitted by means of the windows. They are fitted with Moline’s patent wrought- iron sashes and obscured plate-glass ; the upper portions of them turn on centres. A fire main runs through the building from top to bottom ; it is supplied by a large cistern in the roof. 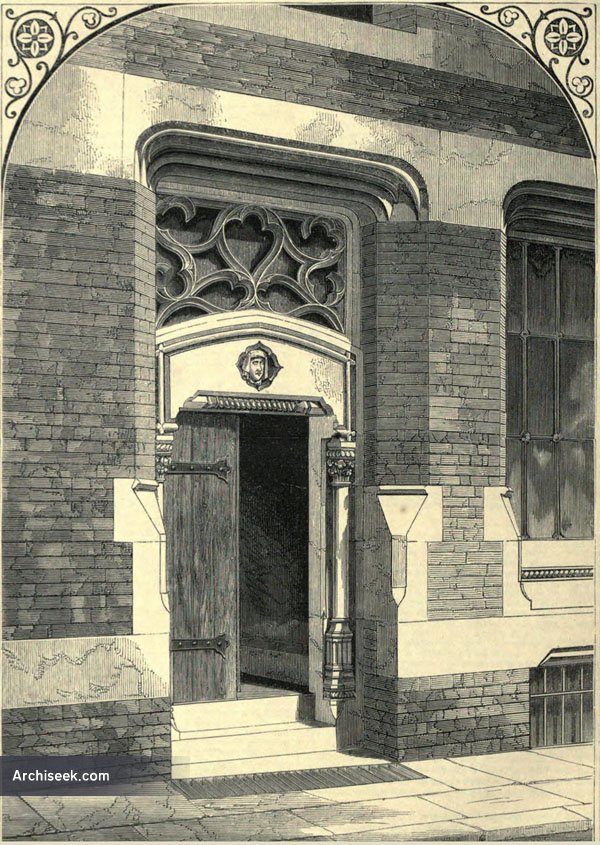 Lavatories, &c., are provided to each story on the landings of the staircase. The interior of the building is perfectly plain ; the walls are lime-whited, and the timbers of the different floors are uncovered. The exterior displays Mr. G. Somers Clarke’s artistic qualities, as palpably as the construction of the building demonstrates his scientific attainments. It shows also great discrimination. The decoration of the front is gradually brought to its richest point on the St. John-street front of the ground-floor. This portion will be used as a sale-room, whilst the portion above is occupied by work-people ; the latter has consequently a plainer character. The whole building strikingly portrays its purpose. It is built mainly of red brick, with occasional belts of black brick and large blocks of stone. Here and there the ends of the iron bolts are seen, painted black with red centres and ornamented, which secure the iron girders to the externals walls. The reveals of the windows are broad, and the piers run upwards through three or four stories, giving the structure an extremely strong and solid appearance. The ground story is of stone drawn from liandell and Saunders’ Bath quarries. The style is a kind of German Gothic, but it is treated with noteworthy originality and freedom. The jambs of entrance-door are deeply moulded and enriched, the angles being chamfered broader and broader as they rise from the solid plinth, till they stop at the grotesque figures which support the twisted beads running round the tops of the openings. The door-head is filled with blank tracery, and in its centre a moulded bracket bears a flnial carved with the head of Guttenburg. The heads of Scheffcr and Faust form the terminals to the drip-moulding of the same doorway. The window openings on this story have rounded corners corresponding with that of the doorway, and similarly enriched jambs. A twisted ornament is introduced in the centre of the splayed cills. The angle formed by the two fronts is chamfered on ground floor, and an ornamental bracket with shield restores the right angle above it. On the flank facade the window j

jambs are less enriched ; they are formed of splayed brickwork and tho stone lintels — still deeply moulde d— are not enriched. The lintels of basement are likewise boldly moulded. A course of black brick and a few courses of red brick intervene between the top of ground story and the cills of first floor. A course of Bath stone then runs throughout, forming the cills of the windows, marked by flush ornament under the openings. The piers thence ascend perpendicularly through the next three stories, and are reconnected above that level by pointed arches in black and red brick. The different stories are decisively marked by recessed surfaces of black and red brick laid ornamentally. Above the arches the perpendicular lines are continued in pairs, bolted occasionally with black brick, varying the design whilst preserving its harmony. The upper windows are subdivided by stone central columns and inner pointed arches. One on each front is carried higher than the rest and is again divided by transomes. The lintels of lower windows are of stone with flush ornament, filled in black at the ends. The fronts are finished by stepped gables and moulded capping varied in size to give a picturesque outline to the building. The larger gables embrace three openings, the smaller span over two of them. Tho principal gables are rendered still further attractive by square flnials laid diagonally to the face of the wall and capped with stone. The workmen’s entrance, as we have before mentioned is in the end bay of the return front. It is beautifully designed and carved, and is enriched with columns in tho jambs, pierced tracery, and a finely modelled head of Caxton. The new building is a welcome addition to the metropolis, but we cannot avoid regretting its position, so £ar removed from the principal thoroughfares, where its many sterling beauties would have been more frequently seen and appreciated.

Mr. George Somers Clarke, of Brunswick-square, is the architect, from whose designs and under whose constant supervision it has been erected. The works have been admirably carried out by Messrs. Kirk and Parry, of Little Queen-street, Westminster. Mr. J. Jane is the Clerk of the Works, who has been employed since its commencement.