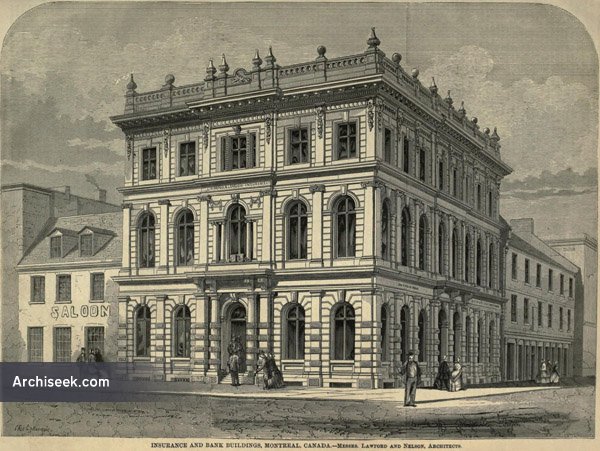 Published in The Building News, January 27 1860. Possibly the Ontario Bank of 1862 on Place d’Armes in Montreal. Now demolished. Interestingly, in the following issue of the journal, the following letter regarding the illustration was published.

“Sir — In a late number of your valuable publication there was an engraving of the ” Liverpool and London Insurance Company’s” offices recently erected in this city, and to which the names of two, instead of three, of the architects employed were appended. I am aware that your instructions were obtained from my late partners Messrs. Lawford and Nelson.

Having, until very recently, been the senior memlier of the late firm of ” Hopkins, Lawford and Nelson,” by whom the building was designed and nearly completed before their dissolution took place ; I felt somewhat surprised to find that my name had been omitted in the engraving you published ; whereas in the Montreal Herald, of November 1859 (a copy o}’ which I now send in corroboration of my statement), you will observe that my name appears’as one of the architects. You will perceive the injustice done to me by tlie omission in a paper circulating so largely as yours does in this country, as I continue to follow ray profession in the same city as my late confreres.

I hope you will oblige me by noticiug this error in the next publication after receipt of this explanation. I am &c.,