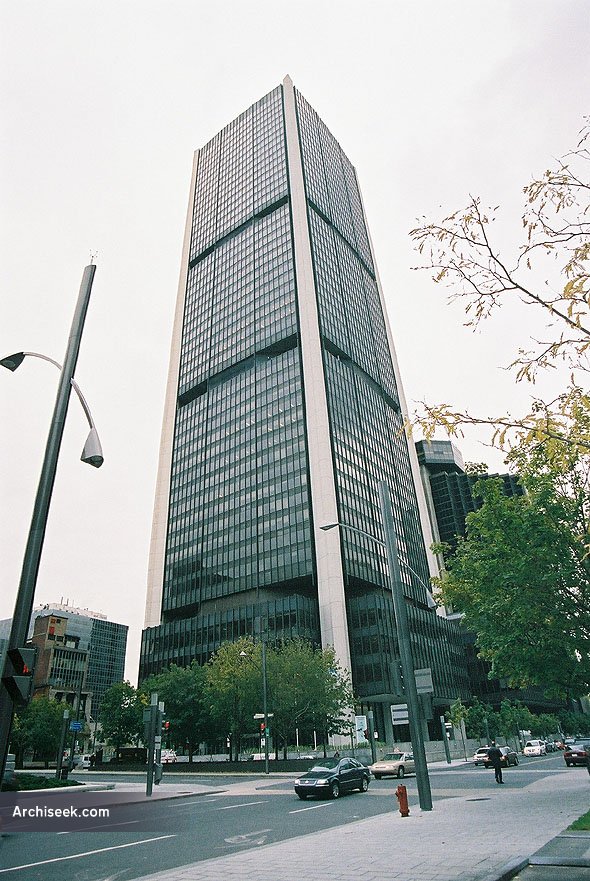 La Tour de la Bourse (Stock Exchange Tower) is Montreal’s third-tallest building, an International Style skyscraper by Luigi Moretti and Pier Luigi Nervi. Built in 1964, this 190-metre, 47-story building was the world’s tallest reinforced concrete tower until the completion of Lake Point Tower in Chicago in 1968, and the tallest building in Canada until the completion of Toronto’s Toronto-Dominion Centre in 1967.

The original project, conceived during the Expo-era economic boom, called for three identical towers arrayed in a triangle. It was scaled back to a single tower, which today forms one half of the Place Victoria complex, along with the Hôtel Delta Centre-Ville.

The tower itself is considered by many to be a masterpiece of the International style of skyscraper design. Its façade, fully renovated in 1995, features a bronze-tinted anodized aluminium curtain wall, forming a strong contrast with the slightly slanted pre-cast concrete columns at the four corners, giving the whole a subtly convex aspect. It is divided into three roughly equal blocks by mechanical floors whose corners are recessed in an octagonal shape, creating small open-air interstices behind the columns at these levels.