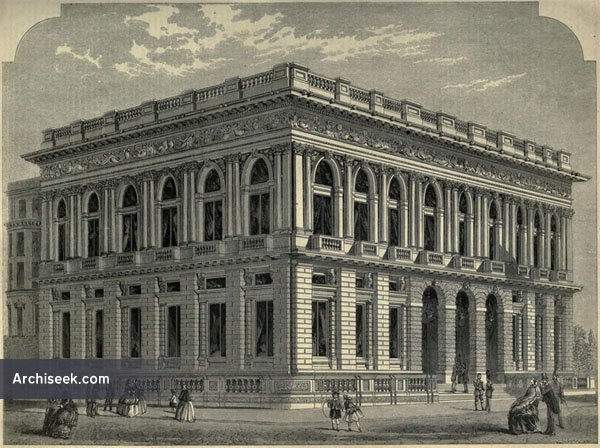 The club was founded by Lieutenant-General Sir Edward Barnes (1776–1838) in 1837 with membership open to officers of the Army, Royal Navy and the Royal Marines. After a limited architectural competition, the club committee chose a design by the sporting artist George Tattersall, who designed a two storey classical building with Corinthian columns and a crowning balustrade ending with martial trophies and a Doric entrance portico of three bays.

After the selection process, The Builder journal pointed out that “the space devoted to the purposes of the club is very meagre, indeed quite insufficient” and charged that members of the armed forces were ill-equipped to judge on matters of architecture. The club then held an extraordinary general meeting and decided to buy another house in Pall Mall to make its site larger, and also to hold another competition inviting the six entrants who had received the most votes in the previous competition. As a result, this design by C.O. Parnell and Alfred Smith was chosen. The club-house was opened on 25 February 1851.

From The Building News: “The circumstance of the competition, in which sixty-nine architects joined, must be remembered by many of our readers. The invitation of the Committee was responded to by many of the most eminent men of the day, and the subject was worthy of their abilities. A noteworthy fact connected with it is that two only of the sixty-nine designs were in the Gothic style. The premiums were awarded respectively to Mr. Tattersall and Messrs. Fowler and Fisk, but some dissatisfaction having arisen with the decision and the qualifications of military men to sit in judgment upon the drawings having been questioned, the Committee decided upon inviting the six architects who obtained the largest number of votes to submit amended designs, and upon taking professional advice before coming to a decision. The premiums were paid to Mr. Tattersall and Messrs. Fowler and Fisk, and they, together with Mes.srs. Parnell and Smith, Mr. H. B. Richardson, Mr. S. Smirke, and Mr. Salvia (substituted for Mr. G. S. Clarke), entered again into the contest. The result is, the magnificent building, now so conspicuous an object amidst the fine structures of Pall-mall.

“The building excited so much public attention when it was completed in 1851 that no less than 7,000 persons visited it in one week. The entrance is at the east side in St. James’s-square, by a loggia of three arches, approached by a short flight of steps, and eonducting the visitor to a spacious hall, which contains many objects of interest ; one of which is a piece of Gobelin tapestry, presented by one of its honorary members, the Emperor of the French ; another a splendid portrait of the Queen by Grant ; purchased .by the club for 400 guineas. The decorations of the hall staircase are of the most artistic character, and a series of well modelled caryatides support the principal cornice. The morning room looks into Pall-mall, and is a superb apartment, 71 feet by 27 feet 6 inches, most elaborately and skilfully decorated in carton pierre by Messrs. Jackson, of Rathbone-place. The cornice breaks round the pilasters on either side of the windows, and the cove is pierced for the windows of what appears externally a mezzanine story. The ceiling consists of oval and circular panels, filled with floriated enrichment. On the north side of the plan is the member’s coffee-room, 81 feet fi inches by 30 feet 6 inches, similarly enriched and with a panelled ceiling, having massive trusses to support the cross-beams, and breaking over the entablature.

The kitchen department is, of course, on the basement, and was fitted in the most complete manner by Mr. William Jeakes. The kitchen itself is 40 feet by 34 feet. The lower part of the walls are lined with glazed Dutch tiles. On the mezzanine floor, between the basement and the ground floor, the baths, dressing-room, and lavatories are placed, supplied with hot water by a boiler in the basement. Besides the rooms we have mentioned there is, on the ground floor, a visitors’ coffee-room, 45 feet by 29 feet, and a house dining-room, 30 feet by 20 feet. This latter room was decorated by Mr. Sang in a very satisfactory manner, with appropriate representations of fruit, &c. On the first floor we have an evening or drawing-room, a writing-room, secretary’s apartments, &c.;” and in an extra story, not visible from the street, we find the smoking-rooms, card room, billiard-room, and the servants’ apartments. The smoking room was decorated in color by Signor Komoli. In all the other rooms the decorative effect is obtained by form alone, and for variety of design and artistic modelling the enrichments are unrivalled by any club-house in London. The contractor for the carcase was Mr. Trego (£18,500). The interior and finishing was executed by Messrs. Smith and Appleford, £16,500. The architects, as we have before mentioned, were Slessrs. Parnell and Smith. ”

Originally the club was faced with Caen stone, but this decayed, and in 1886 the bad stone had to be cut out and replaced with Portland. Similar stone usage at the Carlton and Conservative Clubs resulted in the same repair work being undertaken. Demolished in the early 1950s to make way for a larger, modern clubhouse.