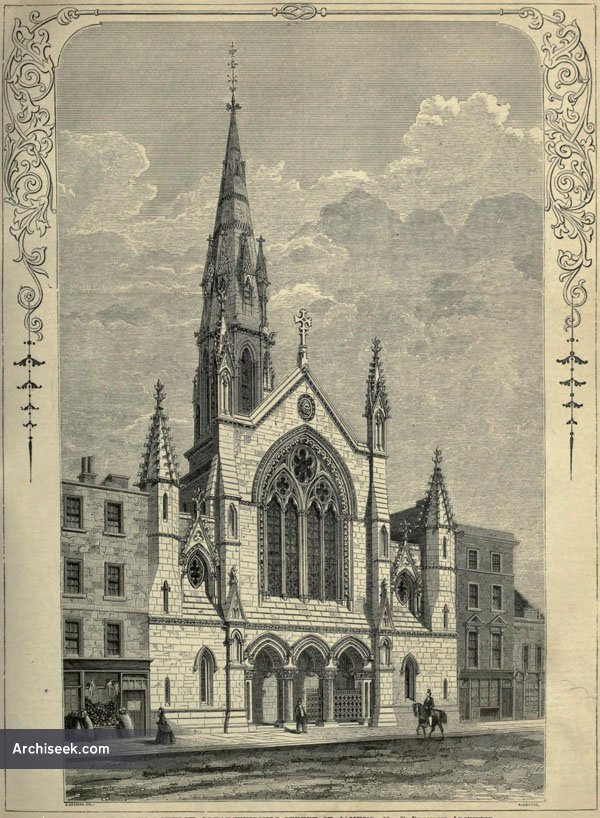 Raphael Brandon was a leading architecture writer and perhaps a less successful architect. With his brother, they jointly produced a series of three works on Early English ecclesiastical architecture that became and remained architectural pattern books for the whole 19th century. Among his many churches were the small church of St Peter’s in Great Windmill Street, London and Holy Trinity Church, Knightsbridge, both of which have since been demolished. He also built, altered, and restored many other churches. However, even Brandon’s becoming a fellow of the Institute of British Architects in 1860 failed to bring him the same success as an active architect as he had had as an author. Already a fragile personality, this along with the early death of his brother Joshua, and the death of his wife and child, all drove him to suicide by shooting himself in the head, in October 1877.

Illustration published in The Building News, June 15 1860. “THE style of this church is Early Decorated. The internal dimensions are ; — length, 98 feet ; average width, 50 feet ; height, from floor to ridge, .13 feet. Accommodation, 713. The building consists of chancel, nave, and aisles, south transept, and west gallery. The cost of the building will be about £5,000, without the tower, which is not to be erected at present. The architect is Mr. Raphael Brandon ; and the contractor, Mr. George Myers. “