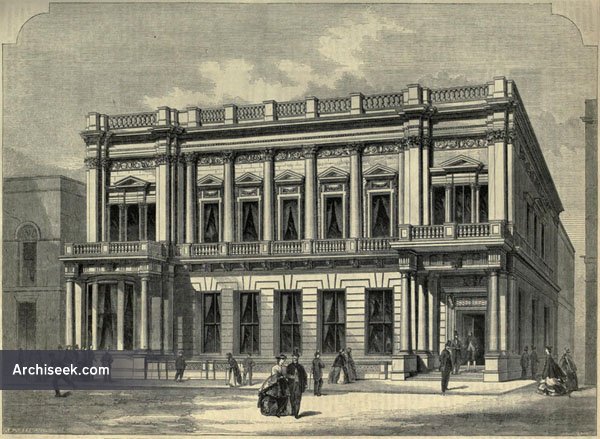 The Conservative Club was a London gentlemen’s club, now dissolved, which was established in 1840. In 1950 it merged with the Bath Club, and was disbanded in 1981. From 1845 until 1959, the club occupied a building at 74 St James’s Street. In 1842 a committee decided to invite George Basevi, Thomas Hopper, William Railton and Sydney Smirke to submit designs for the new clubhouse. The choice of architect was made at a meeting of the committee held on 16 June 1842. Seventeen members were present, and the absentees had been permitted to vote by proxy. After two rounds of voting, Smirke and Basevi each received eight votes and were therefore appointed joint architects. Currently it is home to HSBC, and is where the wealthiest customers go to do their banking. The beautiful interior has been largely preserved and restored although a modern office block was built at the back in the 1960s.

Published in The Bullding News, July 13 1860. “This is visible especially in the upper order where three-quarter columns are carried along the facade, with windows between them. The blankness which would otherwise have resulted from only one range of windows is admirably obviated, by a continuous frieze between, and at a level with the Corinthian capitals. The ground floor is very simply rusticated, and would appear too plain in comparison with the story above, but for the rich balustrade, supported on massive trusses, which divides them. The two wings are very success- fully treated. On the south side isolated Doric columns project, and allow space between them for a handsome bow window, a sine qua non to the club lounger. Corresponding with it on the north side is a columnar portico, leading by a richly carved doorway to the entrance hall. Over these, to mark the wings decisively .clusters of pilasters are placed. They cannot altogether be approved of, but they were almost necessary to give unity to the design. If single pilasters had been employed instead of them, they would have been at once overpowered by the three-quarter columns in the centre, whilst now the two features are well balanced, and in perfect harmony with each other.

The admirable adjustment of the several parts is further noticed in the relative value which the architects have given to the windows as compared with the columns. Neither feature appears insignificant, and each seems to lend value to the other, in return for an importance which it derives from it. It will be useful to compare this front with that of the Keform Club. They are both, within a foot or two, the same height and length, 120 feet by 65 feet. Turning to the interior: on the ground floor of the Conservative we have an entrance-hall 35 feet by 19 feet, an inner hall 35 feet by 35 feet, cofiee room 80 feet by 28 feet 6 inches, ‘morning room 92 feet by 28 feet 6 inches, dining-room 36 feet by 23, besides the usual waiting-rooms, &c. On the first floor there is a drawing-room facing St. James’s-street, over the morning-room, a library 80 feet by 28 feet 6 inches, card-room, committee room, &c. As will be seen, the rooms are very large, and in the kitchen department they are also of unusual extent, and furnished with every apparatus and invention which may contribute to the comfort of the members. The entrance-hall is very prettily planned, and no rooms open into it, and the extent of the building is not immediately apparent, but on arriving by a flight of steps at the far end, a short open corridor on the left leads to the inner hall in the centre of the building, whence all the apartments and the principal staircase may be immediately entered. A great variety of internal architectural effect is thus obtained, and it is increased by the three arches which separate the inner hall from the staircase, and by the circular opening formed in the ceiling of this hall, and the floor of the vestibule above it, through which the dome above is seen, in brilliant relief to that below it.

The hall and staircase are most effectively painted by Messrs. Sarg and Naundorff. The choicest and most beautiful natural forms are twined with exquisite taste among the delicate curves and figures of Classic art upon the walls, the floors are tosselated in divers colors, and a richness and an air of unrivalled luxury pervades these apartments. Color has not been introduced to anything like such an extent in the large rooms, but their architectural decorations, ornamented ceilings, and cornices, and costly fittings fully preserve the palatial character of the building. The columns are of scagliola in imitation of different Italian marbles. In the library the square pillars of grey and green scagliola have bronzed capitals, the book-cases are oak with electrotyped decorations. The evening and card-rooms have bird’s-eye maple and sycamore fittings. The doors and other fittings on the ground-floor are of wainscot oak : in the rooms above, with the exceptions we have mentioned, they are of Spanish mahogany. The baths and dressing-rooms are in an entresol over the basement.

Though sixteen years have passed away since the Conservative was built, and many club-houses have been since erected, it still maintains a proud position amongst its rivals, not only in the several contrivances for domestic comfort, but likewise in the taste which guided every detail of its architecture.”