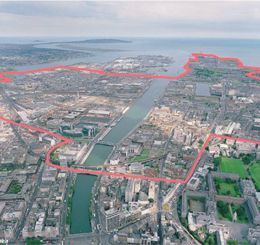 The Minister for the Environment, Community and Local Government has announced today the winner of the prestigious international Europan11 competition. Caroline O’Donnell, an Irish architect who lectures in Cornell University and editor of the Cornell Journal of Architecture (CJoA), has emerged as the winner and was awarded her prize by Minister Hogan in the RIAI headquarters.

Caroline’s scheme, Counterspace, was based on a site in the Dublin Docklands. Described as “This dreamlike scheme is rooted in an idea of layering public and private space across the depth of the site. Poetically imagined and drawn, its robust, rhythmic form-making is softened by vertical landscaping. It is a bold, generous and compelling vision of a different urbanism, maybe even a different time.”

The runners-up were Jane Larmour and Patrick Wheeler . Their proposal ‘East Wall Lot’ was commended for its “confident use of building profile and silhouette, the making and rhythm of opes, the deployment of elements on the site and the calm formation of private and shared spaces constitutes design of a high order.”

Europan is a European architectural federation of national organisations, each of which organises and manages an architectural competition, followed by implementations launched simultaneously on a common theme and with common objectives. Europan offers a unique platform for young urban and architectural design professionals to develop their ideas and vision on series of vital questions about future of our built environment. The RIAI administrates the Irish participation in the Europan competition. The sites proposed in each session reflect the types of contextual transformations that Europe’s cities are confronted with today. The Irish site for Europan11 was in the Dublin Docklands, a new urban quarter which until a few years ago did not constitute part of the ‘mental map’ of the city.