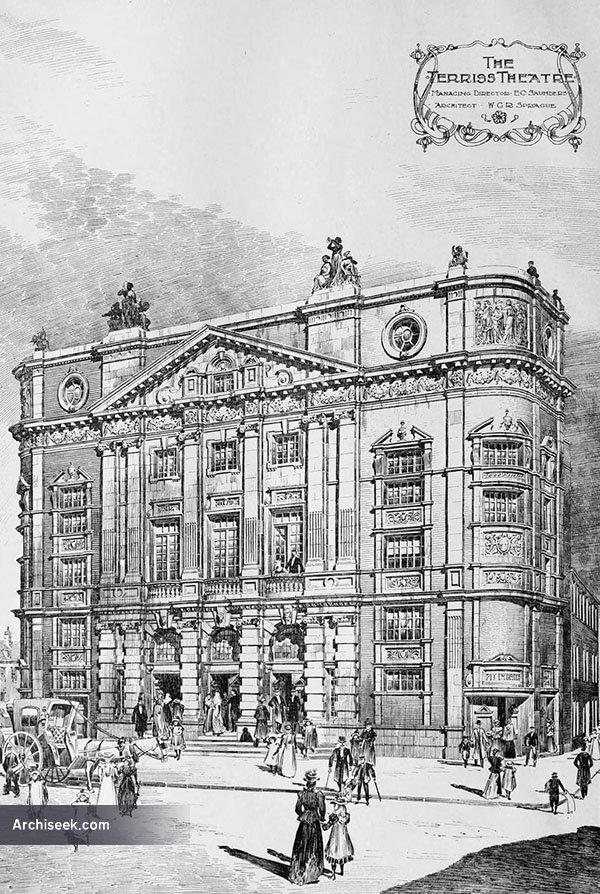 The interior decorations were in Louis XV style, cream and gold prevailing; there were two tiers only, and an absence of pillars. Became known as the Rotherhithe Hippodrome in 1907, and operated as a cinema almost exclusively from 1929. Damaged by bombs during 1943, the theatre was not repaired and remained an empty shell until it was demolished in about 1955.

“The above theatre, the subject of our illustration, is now in course of construction in the Lower-road, Rotherhithe. The building is being erected from the plans of Mr. W.G.R. Sprague, the architect of many of the new theatres recently opened in the Metropolis. The elevation to the Lower-road is of stone and brick, and will present a very imposing frontage. The auditorium is about 67ft. by 58ft.. the dress circle and gallery being constructed entirely without the usual obstructive columns, thus insuring an unimpeded view of the stage from all parts of the house.

The auditorium, front block, and dressing-rooms are constructed of fire-resisting material through- out. The stage is about 70ft. wide by about 32ft. deep, with a height of about 6Oft. This portion is constructed of timber, but is separated from the auditorium and dressing-rooms by double asbestos fire-resisting curtain and iron doors. The internal decorations will be executed in fibrous plaster, and the style adopted will be French Renaissance, artistically decorated in gold and colour, in harmony with the prevailing shades of the draperies and upholstery. It is proposed to light the building by electricity, which will be introduced to form part of the scheme of decoration. Gas will also be provided as reserve in event of the failure of the electric light. The building will be heated by hot water, on the low-pressure system, and an efficient and ample hydrant installation is provided.” Published in The Building News, April 21 1899.