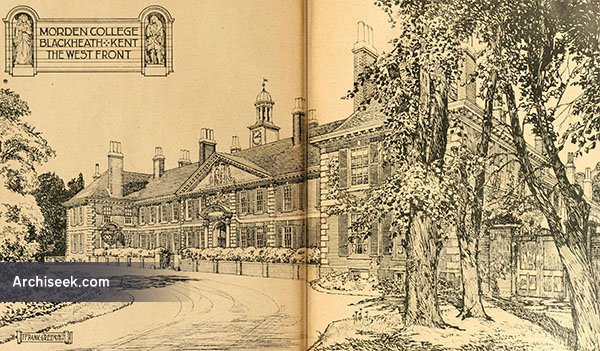 Morden College is a long-standing charity which has been providing residential care in Blackheath, south-east London, England for over 300 years. It was founded by philanthropist Sir John Morden in 1695 as a home for ‘poor Merchants… and such as have lost their Estates by accidents, dangers and perils of the seas or by any other accidents ways or means in their honest endeavours to get their living by means of Merchandizing.’

“Morden College was endowed and erected by Sir John Morden, Baronet, a merchant of Bishopsgat* Street, and member of the Turkey and East India Companies, who appears to have had a considerable and lucrative trading connection with the Levant, The architect was Sir Christopher Wren, and Edward Strong is mentioned by some authors as the Master Mason responsible for carrying out its election. There is a tradition that Sir John’s instructions to Wren were to base his design upon that of Bromley College, at that time a recently completed foundation of a similar nature, of which the founder of Morden College had been trustee and treasurer. The illustration given, from a drawing by Mr. T. Frank Green, gives sufficient indication of the external design, although the side and rear elevations are less ornate.”