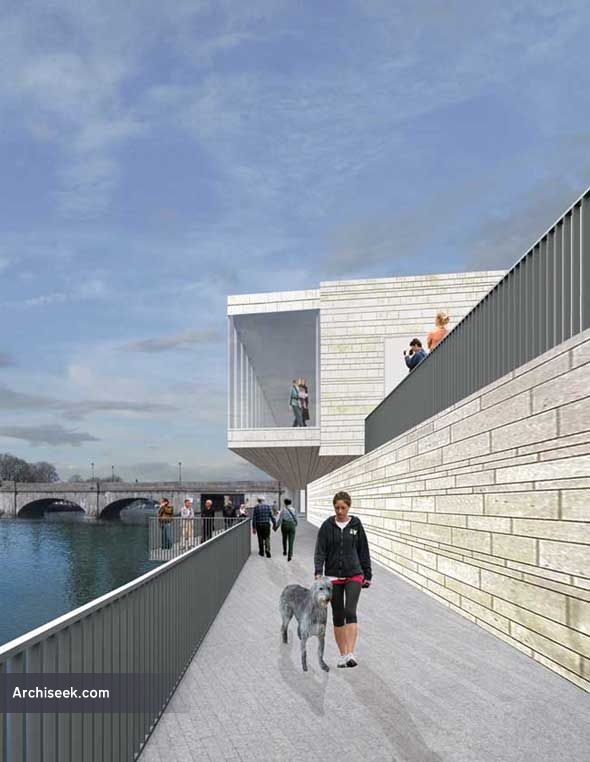 Construction has begun on Keith Williams Architects’ project for a new Art Gallery situated on the banks of the River Shannon in Athlone. The project, for client Athlone Town Council, is situated on a spectacular site on the banks of the River Shannon, adjacent Athlone Bridge, and the neo-Baroque Church of St Peter and St Paul. The scheme involves the remodelling of an existing onetime temperance movement building, the Father Matthew Hall (1897) as a new artspace with the addition of a “white box” gallery wing in new construction.

The 600 sqm project will provide:

The palette of materials for the new gallery wing is limited to rough cut horizontal strips of limestone of varying widths asserting the mass of the new wing. Zinc clad roof lanterns will be set back from the parapet wall to allow the limestone to have prominence in the facade, whilst centralising the light penetrating into the gallery. The Father Matthew Hall will be re-rendered and re-roofed in slate, retaining externally the essence of its historical character, whilst internally it will be stripped back to its bare walls and roof structure.

This is the third commission for Keith Williams Architects in Athlone, the first being the multi award-winning Athlone Civic Centre and Library completed in 2004 followed by the town’s Army Memorial in 2010.