“Introduction to the Architectural Heritage of West Cork” launched 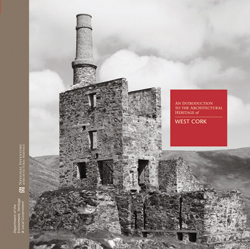 A total of 2,836 structures in the West Cork NIAH survey are rated as being of regional or higher architectural importance. Under planning legislation, Minister Deenihan will be statutorily recommending to Cork County Council and to the town councils in West Cork that these structures be included in the Record of Protected Structures.

Minister Deenihan referred to the inclusion of lighthouses in the survey, noting those at Bull Island, Galley Head and especially Fastnet remarking that “it is an iconic West Cork structure and a testament to the skill and dedication of those involved in its construction in the late 19th century.”

The Minister concluded with thanks to everyone involved in completing the survey and preparing the publication. In particular, he thanked all the owners and occupiers for allowing a record to be made of their properties for the survey saying “I want to pay tribute to the landowners who gave access to their properties to allow this important work to be undertaken.”

The publication An Introduction to the Architectural Heritage of West Cork is available from the Government Publications Sales Office, Molesworth Street, Dublin 2, Irish bookshops or online from www.wordwellbooks.com and is priced at €12. The full NIAH survey is free to access on www.buildingsofireland.ie.