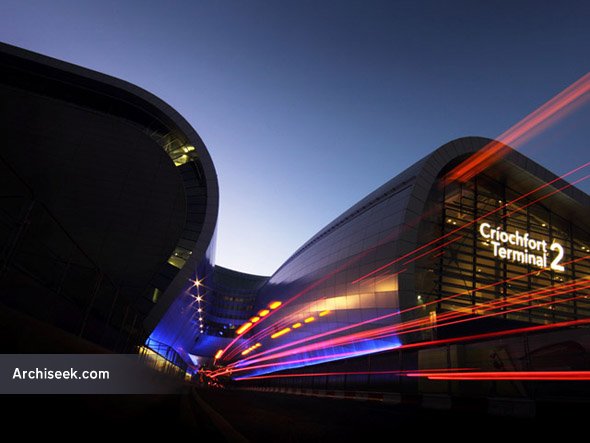 With its steel and glass facade, the new terminal makes use of natural light to create a modern and comfortable space for both departing and arriving passengers. The three storey terminal building has been designed with bright spaces in areas where passengers dwell such as check-in, baggage reclaim, security and the departures lounge. Terminal 2 will be home to Aer Lingus, American Airlines, Continental Airlines, Delta Air Lines, Etihad Airways and US Airways. The new terminal is opening for operations on a phased basis, as agreed with the DAA’s airline customers. Aer Lingus has already started putting selected flights through Terminal 2 with a full transfer of its scheduled operations from January.

“Designed with the passenger in mind, T2 has been planned and built for the long-term,” according to Dublin Airport Authority (DAA) Chairman David Dilger. “The new terminal is the centrepiece of a five-year investment programme to expand, improve and upgrade Dublin Airport. Our passengers told us that they wanted better facilities and we have delivered them.”

T2 contains almost 40 new shops and food and beverage outlets, combining the best of Irish and international retail. The vast majority of the outlets will be operated by third party concessionaires and the income from this retail space, which is fully let, directly subsidises passenger charges at Dublin Airport. The facility has the capacity to cater for up to 15m passengers with 54 check in desks.

Terminal 2, which has already won a major design award for its use of structural steel, was built by a consortium comprising Arup, Mace, Pascall+Watson and Davis Langdon PKS. The new terminal was funded through a combination of commercial revenues, aeronautical charges and borrowings as the DAA receives no funding whatsoever from the state.