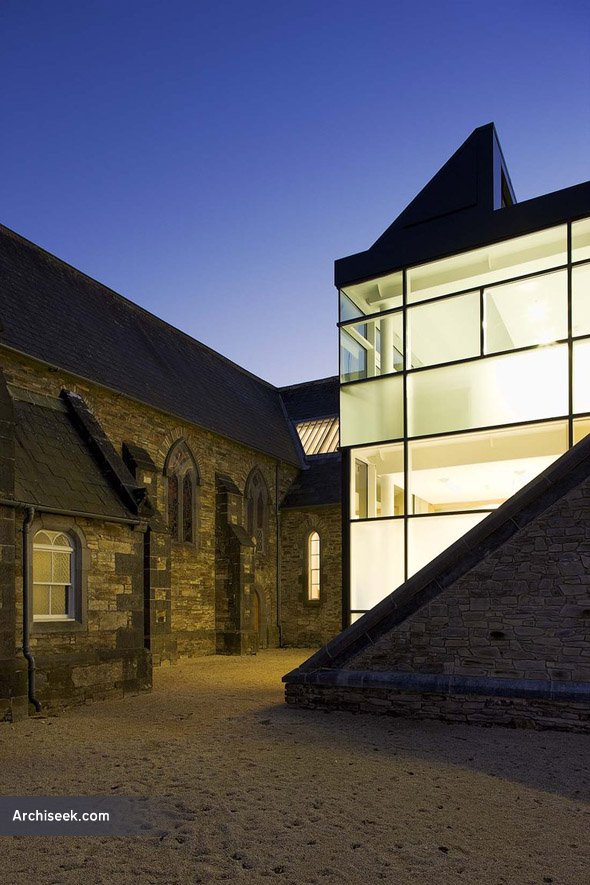 Built between 1842 and 1863 and designed by AWN Pugin according to his ideal monastery plans in ‘True Principles’, this building was a convent until 2005. In early 2006 dhb architects were asked to study the feasibility of transforming it into a Health Park. The Brief was an interesting one; to provide the full range of community-based medical services, from GP to Minor Operations, under the one roof and in a protected structure (listed building) of international importance. The nature of the brief suited the existing building with its cellular, centralised plan, allowing for a distribution of consulting rooms around a cloister layout on ground and first floors. During the survey process, a soaring, barn–type structure hidden behind partitions in part of the building that had been ‘filled-in’ with rooms and floors in the early 1960s was discovered.

The architects proposed that this space be restored to its original volume and be used as a semi-public reception and drop-in area, enlivened by the addition of a coffee shop and roof lighting. In order to make it the welcoming heart of the scheme, the existing stone gable, which had been altered beyond recognition during the 1960s, was removed and used a fully glazed screen to present Pugin’s magnificent structure in section.

Pugin’s chapel, one of the few he designed still to retain its rood screen, was left untouched, to become a space for relaxation and contemplation. The cloister garth was re-landscaped as a healing garden. Very few changes were required internally; where openings had to be made this was done not just to provide access, but to facilitate the legibility of the circulation and create contrasts of natural light to draw the visitor through.

The reuse of the old building in as unintrusive a way as possible was facilitated by the addition of two new blocks to the east and west of the restored reception area. These blocks contain the services used to ‘help’ the older building along by accommodating some of the technical requirements, such as the solar panels and rain-water harvesting. In constructional terms, these new blocks consist of a light, hollow-steel frame on a 3.6m grid, allowing the use of timber decks for floors and roofs. The angular rooflights provide maximum lighting levels for a dental surgery at first floor level. The new wall build-up consists of an inner face of 365mm Poroton block faced with an outer layer of stone. This stone was recycled from the stone of the demolished gable, each stone having been cut in two, with the sawn face outwards. In this way the new blocks are clad in a transformed version of the old, ensuring continuity of character and fabric.