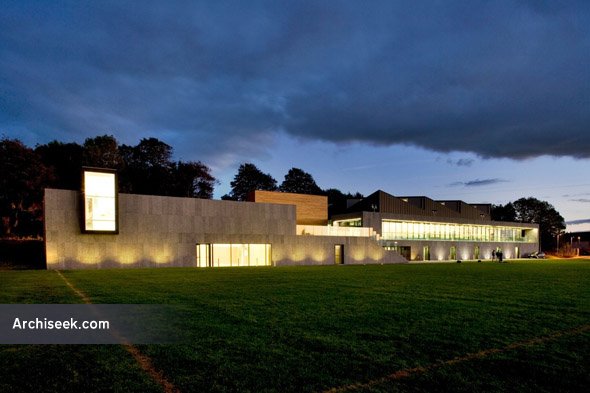 Occupying a prominent location on the new entrance route through the mature landscape of Mary Immaculate College this building was conceived as a pavilion type structure announcing an as yet unrealized extensive redevelopment of the existing Campus.

Set against a back drop of trees the building is intended to have a powerful visual impact when viewed from a distance. When approached on foot a sequence of external spaces lend human scale to what is otherwise a large ‘stand alone’ structure.

The building lies on a strong pedestrian desire route between student accommodation located to the west and the main college Campus. An external flight of stairs directs this route through the courtyard space and in so doing creates an architectural event along the route.

Three halls are accommodated within the building; one large hall (900 sqm), used for recreational sport, examinations and the annual conferral ceremony together with two smaller halls (325 sqm) dedicated to the tuition of physical education. Ancillary accommodation, including changing rooms etc, is located within the lower podium level wrapping around the main hall.

The accessibility of the building is enhanced by the sloping topography of the site, which enables the main entrance to be located at the upper podium level allowing access directly into the public viewing area, which affords views into the larger hall and out over the playing pitch. These public spaces are intended to facilitate informal chance encounters outside of the college programme.

The building is partially excavated into an embankment and the reinforced concrete retaining structure is expressed internally up to podium level. A series of clad steel structures sit on top of the masonry podium allowing wide spans that contrast with the relatively confined nature of the spaces within the podium. The roof structure of the large hall, which spans up to 45m diagonally across the hall, is a dynamic response to the requirement for north light. In order to avoid unsightly bolted flange connections to the main hall roof structure prefabricated truss components were site welded to give a seamless finish.

In recognition of the coded use of material evident in the historic core of Limerick City, where brick is used for ‘fabric’ buildings and limestone is used for ‘object’ buildings the principal material used externally is Irish limestone. Roof elements are clad in black zinc, which contrasts strongly with the flamed limestone used for the main body of the building. The hall overlooking the entrance courtyard is clad in European Oak, creating an intermediate layer to the backdrop of trees.

All three halls are passively ventilated by way of air plenums and roof extract, which avoids the requirement for large unsightly ductwork. The main hall is subject to significant demands with regard to environmental engineering during the annual conferral ceremony when the occupancy is in excess of 1300 people.