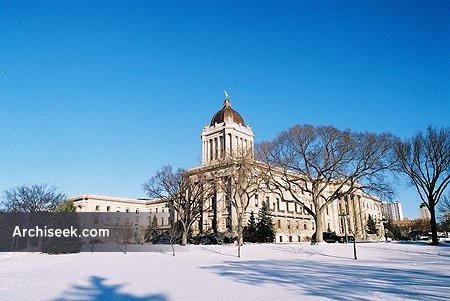 This was the last of the major provincial legislatures to be constructed and reminiscent of the large 19th century City Halls of the UK. Built between 1913-20, the building was designed by Francis Worthington Simon (1862-1933) after an architectural competition open to all British subjects. Simon was a former student at the Ecole des Beaux-Arts and this influence can be seen in the richly decorated exterior and ornate interior with axial planning.

There were serious difficulties between both architects and the client – the Government refused to allow Simon and his partner Boddington to supervise the project, preferring to use their provincial architect. A Royal Commission inquiry in 1915 found that this had been to enable funds for the building to be diverted to party funds and vote-rigging and the Conservative Rublin government had to resign. Simon then became supervising architect and after Boddington enlisted in the Canadian army in 1917 he had to take up full-time residence in Winnipeg until the building was completed and dedicated in July 1920.

The building itself is made from Manitoba Tyndall limestone from the town of Garson. The stone has traces of fossils in it from the time this area was a tropical sea which provides a distinctive pattern. The building has four monumental facades: the main facade to the North; West to Osborne Street, South to the Assiniboine River; and the Eastern to Kennedy Avenue.

The famous Manitoba Golden Boy atop the 240 foot high dome represents eternal youth and the spirit of enterprise. This bronze statue is 13 and a half feet tall, and covered with 23½ carat gold, and is the work of French sculptor Georges Gardet. It has been recently restored.

There are also symbols adorning the building that represent the Red River, the Assiniboine River, a pair of sphinxes, farmers planting, farmers harvesting, symbols of agriculture, art, science, industry, war, and peace. On the side entrances, the steps are flanked by important figures from Manitoba’s past.

The interior is dominated by the vast entrance hall and staircase. The staircase has three flights of 13 stairs and provides a ceremonial route through the rotunda underneath the dome to the assembly room. The staircase is overlooked by arcaded corridors on all sides on all three levels. This is covered by a decorative top-lit ceiling. The whole effect is imposing, creating a sense of power.

The sculptor of the Golden Boy, Georges Gardet, is also responsible for the two life-sized bison flanking the grand staircase. Each of these bison weighs 2,268 kilograms. The interior is richly detailed with many sculptural pieces.

The rotunda has an opening through the floor to ground level where the centre of the building is marked in the floor design. Above the doorway to the assembly chamber is a mural commemorating Manitoba’s war dead. This mural and the ceiling provide the colour as the walls are left in their natural stone state.

The finest interior in the building is the Manitoba Room which lies to the front of the building and is used for official functions. It is a grand space with fine columns and chandeliers. Other interiors of note include the Assembly Chamber and the Lieutenant Governor’s Office.