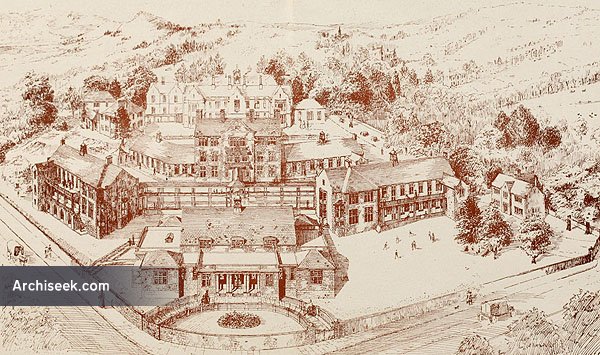 From The Building News, July 23, 1920: “This group of hospital buildings occupies the southern aspect on the slope of a hill, there being a difference of about 40 ft. between tho ground floors of the three blocks of buildings. Accommodation is provided for 204 beds for patients. The hospital consists of a north block, an existing building remodelled and extended; a central block, the wings of which are to be occupied by men, the upper floors of the centre parts of the premises being employed for paying patients; and a south block, consisting of two wings disposed east and west. Each building thus arranged is two stories high: the upper floor on one side is allocated for men, the upper floor being used for children (who have an ample playground) and the other wing is wholly devoted to women. The upper story of these, blocks is on the same level as the ground floor of the central block. The out-patients’ department gas a separate approach from the highway on the extreme south of the site at the angle formed by the roads on that frontage.

This building is placed in the centre and has a waiting hall in the middle of the block, reached through a spacious vestibule and a portico. A theatre for minor operations is provided in this building to the right of the patients’ assembly hall afore-mentioned. Two hostels for nurses, having a recreation room set between this pair of blocks and common to both, are , situate to the west of the northern or main building. The laundry and the maids’ quarters are put north of the hospital blocks, and in the apex of the land beyond are the mortuary, workshops, and motor house. The gates and entrance lodge to the hospital are placed to the right at the corner of Sutton Street. The boiler house, engineers’ shop, and stores are planned below the central block, and have a separate road approach. All the buildings will be heated and supplied with hot water from this department. The lighting will be by electricity. The buildings are to be faced with coursed stone having dressed quoins. Green slates will cover the roofs. There are two lifts, capable of taking beds and communicating with all floors. The various buildings are connected throughout by corridors and covered ways. The architects are Messrs. Edwin T. Hall, F.R.I.B.A., and E. Stanley Hall, M.A., F.R.I.B.A., 54, Bedford Square, London, W.C. “