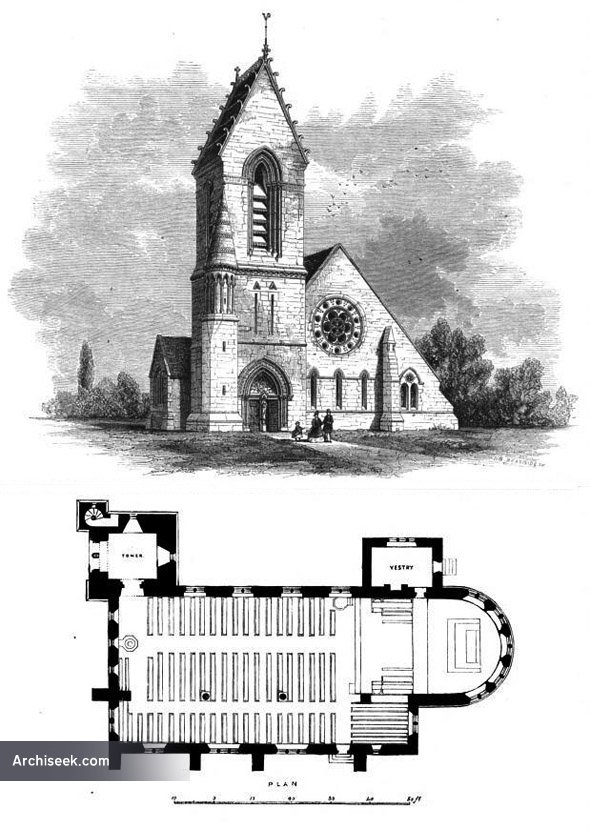 “The subject of our chief cut, the new church of St. Cuthbert, Durham, has just been completed, from the designs of Mr. Robson, of that city. The type upon which its architectural features have been modeled is that of the Early thirteenth century English Gothic, modified by a tinge of French character in some of its parts. The arrangement, as will be seen by the plan, consists of a nave and south aisle, a semicircular apse to the chancel, and on the north side a projecting vestry, and at its western extremity a saddle-back capped tower. The principal entrance to the church is through a double doorway in the western face of the tower, the divisional pier of which has a niche containing a figure of the patron saint. In the tympanum above is represented “Our Lord in Majesty,” within a vesica, and surrounded by the evangelistic symbols. The nave and aisle roofs are continuous; but the line of division is marked externally by a change in the system of slating, a pattern being used on the nave and chancel only. The chief feature of the west end is the large circular window, which may be described as a series of small circles, surrounding a St. Cuthbert’s cross, the whole slightly recessed from the general face of the wall. The chancel and nave roofs are continuous, and surmounted by a rich metal cresting. The apse windows are coupled, with a circle under a comprising label above, which connects the whole at the level of their springing line.

The interior is wholly without plastering, the walls being of red brick, relieved by horizontal lines of black. In the chancel, a pattern in inlay cement is also introduced. The nave columns are of granite, having stone capitals. The shafts to the apse windows are of Frosterley marble. The fittings throughout are of oak, the seats being moveable, and all free. The total cost of the church has been about 3,0002.

The structure was to have been consecrated this week; but in consequence of some legal formalities required by the Ecclesiastical Commissioners, the Bishop has been obliged to postpone the ceremony.” As published in The Builder, August 1st 1863.