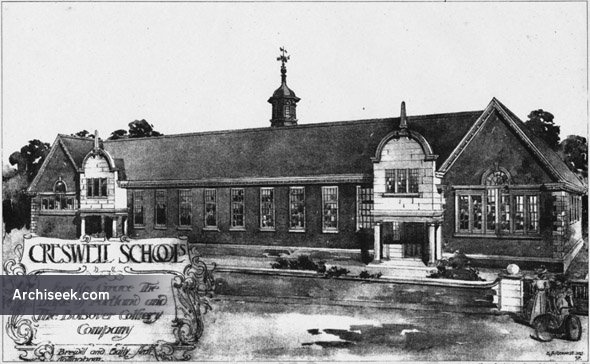 Caption reads: “for His Grace The Duke of Portland and the Bolsover Colliery Company”. “These schools are situated on a plot of land close upon an acre in extent, near where the old buildings stood at Creswell Crags, and given for the purpose by the Duke of Portland, who, together with the proprietors of the Bolsover Colliery Company, has undertaken to defray the cost of the scheme, which will amount to upwards of £5,000. The opening ceremony was performed by the Duke of Portland on Whit Tuesday. The work of erection, extending over a period of twelve months, has been carried out by Mr. H.R. Simken, of Bolsover, to the designs of Messrs. Brewill and Baily, architects, of Nottingham, and the perspective is now hanging in the Royal Academy. The school, which will accommodate 450 children, consists of a large central hall, seven spacious classrooms, cloakrooms, and lavatories, with master’s and mistress’s rooms all ranged over the projecting stone-pillared porches to the separate entrances for the boys and girls commanding the respective playgrounds. The central hall has an open roof, and is surmounted by a bell and ventilating turret, the architecture being of the Gregorian period, and carried out in red sand-faced bricks, with stone dressings, white wood cornice, and green slate roof. The heating apparatus, which is by low steam pressure, was put in by Messrs. Ashwell and Nesbit, Limited, of Leicester and Nottingham, and in the preliminary trials has acted excellently.” Published in The Building News, June 9th 1899.