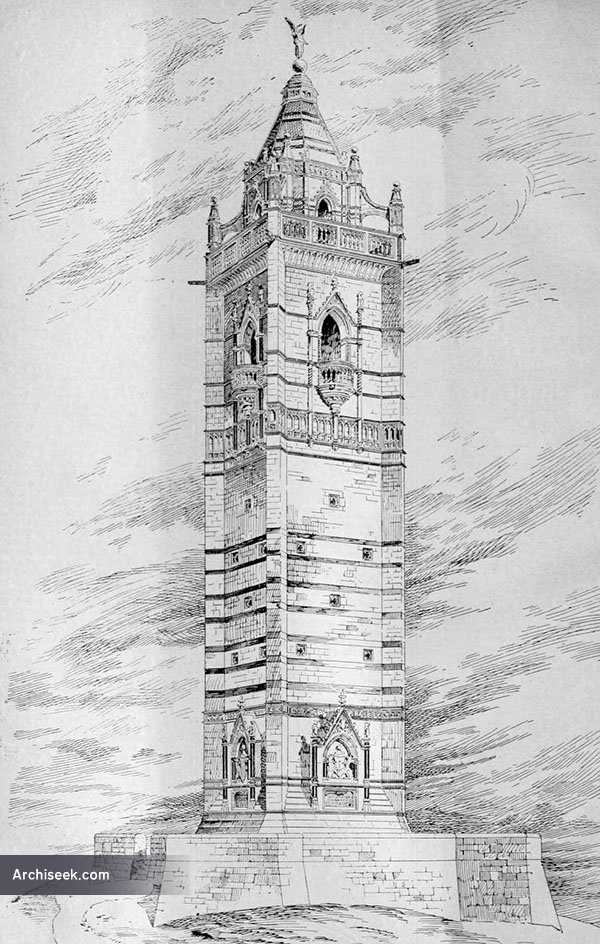 Cabot Tower was constructed in memory of John Cabot, 400 years after he set sail from Bristol and landed in what was later to become Canada. The foundation stone was laid on 24 June 1897 and the tower was completed in July 1898. The tower is 105 feet tall, and has spiral staircase that leads to two viewing platforms which overlook the city. Grade II listed building.

“This memorial was ceremonially unveiled on Tuesday afternoon by the Marquis of Dufferin and Ava, who had on June 21 last year laid the foundation-stone. The monument, which, it will be seen, takes the form of a squarely-built tower, occupies a commanding position on the summit of Brandon Hill, an eminence which is itself 260ft. above the level of the harbour. The tower stands 105 ft. high, and has been erected by public subscription to commemorate the fourth centenary of the discovery of the continent of North America by John Cabot, who sailed from Bristol in a local ship and with a local crew. Their eventful voyage was made under letters patent granted by King Henry VII. to that intrepid navigator and his three sons, Lewis, Sebastian, and Sanctus. The tower is divided into two stages, each relieved by an ornamental balcony, the floor of the upper balcony being 7.)ft. from the base, whilst above rises an octagon spire of freestone. Soft, in height, surmounted by a globe and figure symbolical of Peace, both gilded. The tower is ascended by a circular staircase of good width to the first stage, and above that there is a spiral staircase to the second stage. The treatment of the design is typical of the style prevalent in England at the time of Henry VII. In the panels upon the four sides of the base are appropriate sculptured designs, and also tablets bearing suitable inscriptions. One of these concisely narrates the history of the memorial ; another, decorated by the representation of a dove and olive branch, records that it is placed there by the Bristol branch of the Peace Society, ” in the earnest hope that peace and friendship may ever continue between the kindred peoples of this country and America.” Brass plates are affixed to the balustrades of the upper balcony indicating the direction and distances of various cities in England and abroad, and also pointing out the buildings of interest to be seen from the balcony. On the plates, too, are engravings of the buildings mentioned, and also an indication of the height of the balcony — viz., 334ft. above ordnance survey datum. Amongst the names of places on the plate on the west side is that of “Canada,” which, it is stated, is about 2,400 miles distant, and is the land first seen by Cabot, a.d. 1497. The tower has been built from the designs of Mr. W. Venn Gough, architect, 23, Bridge-street, Bristol.” Published in The Building News, September 8 1898.