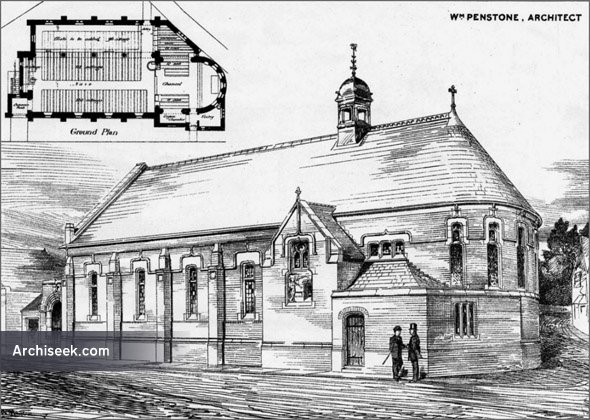 A selection of designs published in The Building News, December 12th 1879. It is unclear if the winning design was ever constructed.

The instructions issued to the six competitors required that the church should be so placed as to leave as much space as possible in the site for the future erection of a mission- room or school- room, and it was also laid down that no en- trances to the church should abut directly on the road. These requirements, and the desire to place the church east and west, led to the arrangements shown. No sum was stated, and the estimated cost of this design was £2,900, when completed, to accommodate 400 persons. The materials proposed were red brick facings out- side and stocks inside, with Bath-stone dressings sparingly used, with simple cusped heads and no tracery. An angle at the west end towards the road was intended to be occupied by a drinking-fountain. a.n attempt was made to give the building as much as possible the character of a small mission church. — Aston Webb.

This design has been studied -with the view of providing, in the most economical manner consistent with the requirements of the Incorporated Church Building Society, for the number of sittings demanded. All attempts in planning to retain an eastern position of chancel on this site, requiring a form of structure expensive by reason of wide span roof and intersections ; the church has been placed parallel to the longest side of the triangle, and is planned upon the simplest lines of nave, apsidal chancel, and single aisle under one roof. A wish to depart in some measure from the vernacular early pattern district church, has led the author to approach in the detail to the later, simpler, forms of Flemish work. The western gable is marked with ogee brick tracery, the -windows generally being square headed with ogee moulding. The use of stone is nearly confined to the heads and sills of doorways. All estimate, carefully prepared by a surveyor of experience, placed the cost of the entire building at £2,350. — W. Penstone.

This church has been designed as a town church, and the aim has been to get effect by size and good proportion, that it may assert its position amidst the surrounding houses. Strict economy being ordered, simple lancet windows have been used, and character given to them by making them all with wide splays internally. The church was intended to be built of red brick, plain framed roof with principals, purlins and tie, beams, slate covering, oak shingled bell turret, and simple stained deal fittings. A good space is arranged at the east end for coloured decorations, and any amount of richness and colour may be obtained on the roof, walls, and windows. The cost was estimated at £3,450, complete. — J. Edwaed K. Cutts.