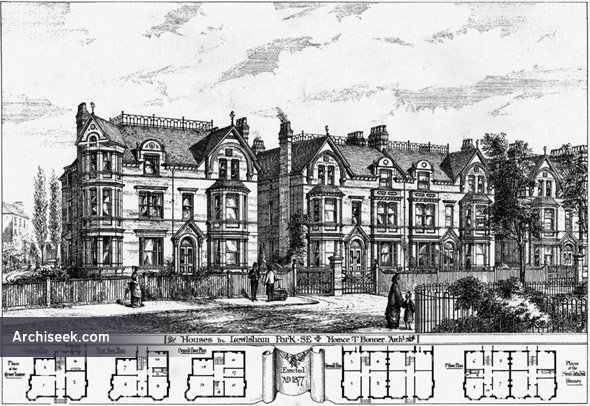 Perspective view including plans published in The Building News, October 4th 1878. “These houses have been lately erected on this estate, which is pleasantly situated near Lady- well Station (S.E.E.), Lewisham village, Kent. The houses are erected in stock bricks, with Bath stone dressings, and slated roofs ; they are fitted with all modern conveniences, and have good cellars ; a conservatory is placed off the first landing of staircase. The plans will speak for themselves. The four semi-detached houses have been well carried out by Mr. T. J. Jerrard, of Lewisham, Mr. Day being foreman of works; and the corner house by Messrs. Staines and Son, of Great Eastern-street. All are from the designs and under the superintendence of Mr. Horace T. Bonner, of Lewisham, and King-street, Cheapside.”