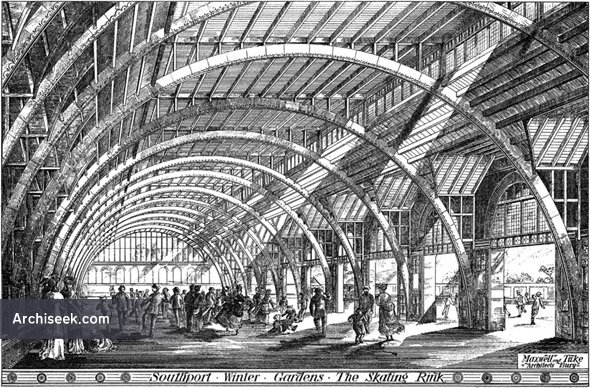 Designed by Maxwell & Tuke of Bury. Published in The Building News, December 24th 1875. The Winter Gardens were opened on 16 September 1874, on the sea front at Southport. The building had two pavilions, one of which held a concert hall known as the ‘Pavilion’, while the other was the iron and glass Winter Garden known as the ‘Conservatory’. The Pavilion had a capacity for 2,500 people and the Winter Garden was a total 180 ft in length with a maximum height of 80 ft. Southport Winter Garden was advertised as the largest conservatory in England and being the first seaside Winter Garden in the UK. Refreshment rooms and an aquarium filled the basement level.

Never a great commercial success, the addition of Frank Matcham’s Opera House on an adjacent site in 1890-91 strained the capital base too far, and the Company went into liquidation in 1898. Over the years many companies came and went in an effort to save the Winter Gardens and turn a profit. Entertainments were driven downmarket, until the Winter Garden was converted into a ballroom and roller skating rink, and the Pavilion became a cinema. Eventually both were demolished, the Winter Garden in 1933 and the Pavilion in 1962.