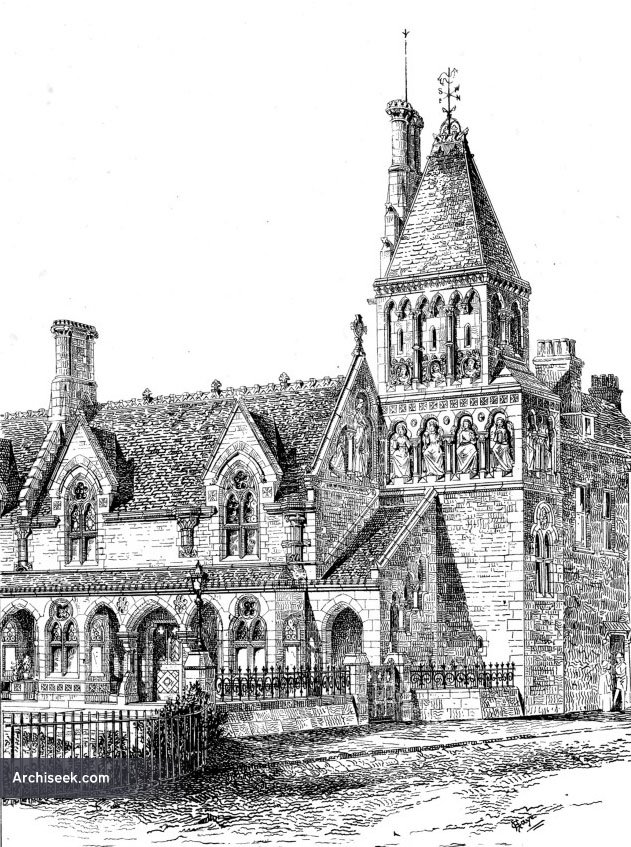 Design for new almshouses to be erected in Fulham, and published in The Building News, May 12th 1871. “THE illustration which, according to a recent
promise, we give this week of the Almshouses erected from the designs of Mr. Seddon at Fulham, re- presents the portion next the road, with the tower built to hold the general water cistern for the whole of the buildings, and a small room for a library in the first story, and the gas meter below. The entire structure consists of residences for twelve widows, arranged in pairs, each of which has one entrance doorway situated under a recessed porch. On either side of this is the bay window of a living-room. The porch is formed by an arcade of three arches from bay window to bay window, carried on corbelled piers. Another arch connects this bay window of this pah with that of the next, and thus the cornice above is continuous, as well, as the lean-to roof, which covers the whole arrangement of porches and bay “windows, which are thus connected, and made into one feature. A staircase is carried up within opposite each doorway, and branches right and left to a bed-room over each living-room, lighted by the two-light traceried dormer windows seen in the lithograph. The material of the walling is a brown Yorkshire sand- stone, with dressings of golden-coloured Caniden limestone, and the columns of green sandstone. The roofs are covered with Broseley tiles, with terracotta ridge crests. The several down-pipes in the front are made into ornamental features. The three carved heads in the upper story of the tower represent Faith, Hope, and Charity, and blocks of stone are left in the panels below for figures of saintly women, with the Annunciation on the return face. In the gable next the tower is the inscription “God’s Providence is our Inheritance.” The doors are constructed of pitch pine, with ornamental panelling of bog oak and other woods. The site is a charming one, facing the picturesque church tower and churchyard at F’ulham, and backed by the fine trees of the Bishop of London’s grounds immediately behind.

The work has been executed by Mr. Wigmore, builder, of Walham Green, from the designs and under the superintendence of Mr. Seddon, as architect. The cost has been about £3,000, provided partly by the funds of the charity and sale of the old almshouses on another site which had fallen into dilapidation, and partly from subscriptions raised in the neighbourhood by the Rector, the Rev. R. Baker, and Mrs. Baker, for the special purpose that the work might be made more architectural than would be otherwise justifiable under the circumstances.

Some picturesqueness has been attained by the manner in which the structure has been arranged at the opposite end from that shown by our illustration. One pair of the residences has there been turned at right angles to the rest, so as to face the road and make the general plan an L shape, and an archway in the angle leads through to the rector’s garden beyond, and a laundry and washhouse for the use of the inmates has been provided at the corner thus left between the residences. A bay window, corbelled out from a flat pilaster to light the first floor of the end house, gives a pretty feature to complete the building there, where the gable end faces the churchyard. “