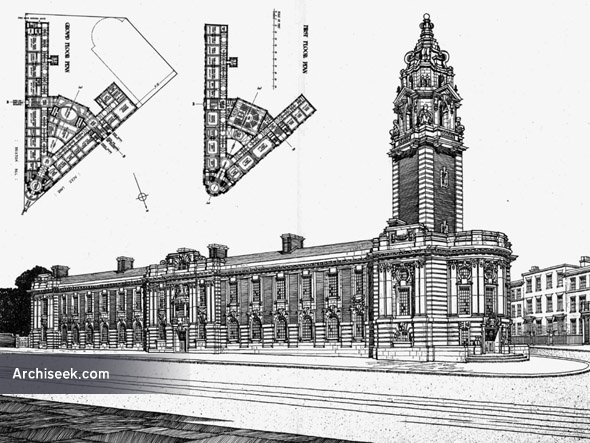 Perspective view including ground & 1st floor plans of 1st Premiated Design as published in The Building News, May 19th 1905. After the Metropolitan Borough of Lambeth was formed in 1900, it was soon realised that the old Town Hall at Kennington Green was no longer adequate to deal with the greatly increased responsibility of the new borough. The council decided to build a new town hall, more suitable for its needs and more centrally placed. The present site in Brixton was acquired and in 1905 an architectural competition for the new building was held which attracted 143 entries. Two young architects, Mr Septimus Warwick, ARIBA and Mr Herbert Hall, ARIBA submitted the winning design.

The foundation stone was laid on 21 July 1906, and the building was officially opened by King George V and Queen Mary (then Prince and Princess of Wales) on the 29 April, 1908. The total cost of the building was £48,000. Queen Mary returned thirty years later to open an extension designed by one of the original architects (Mr Herbert Hall). The extension provided much needed office space and a fine public hall.

The exterior is faced with narrow red bricks, with an extensive use of Portland stone, based on a grey granite plinth. The extension built in 1938 was constructed in the same style and of similar materials. The tower of the Town Hall stands 134 feet high and houses an illuminated clock which strikes the hour and chimes the quarters. The clock was presented to the council by Edwin A. Jones JP in 1909. The sculptors at the four corners of the tower represent Art, Literature, Science and Justice.